Holders Barcelona have qualified for the semi-finals of this season’s Copa del Rey after defeating city rivals Espanyol 2-0 in the second leg quarter-finals at the Nou Camp on Thursday night.

Barcelona go through 2-1 on aggregate after losing the first leg 1-0 last week Wednesday.

Suarez opened the scoring for Barcelona in the ninth minute before Messi doubled their lead in the 25th minute.

The game saw new €160m signing Philippe Coutinho make his debut for Barcelona as he replaced Andres Iniesta in the 68th minute. 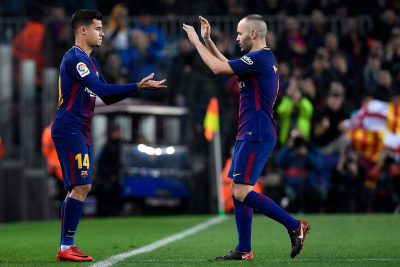 They now join Valencia, Sevilla and conquerors of Real Madrid, Leganes, in the semi-final.