By James Agberebi:
After recording a perfect start in their debut game in the COPA Lagos Beach Soccer Fiesta against Pepsi Football Academy, Gidi Sharks were brought back down to earth as they suffered a 9-4 defeat to Kebbi Beach Soccer Club on matchday two in the 2017 edition at the Eko Atlantic City, Lagos on Saturday.

It was a game the Kebbi side dominated from start to finish as they bounced back from their opening day defeat to the Arsenal beach soccer team.

Kebbi made their intentions known right from the off as they took the first period 4-0. 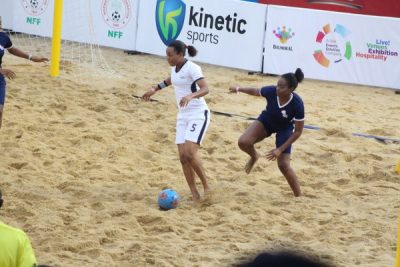 Lagos side Gidi Sharks put up a bit of a fight by scoring two goals but it was Kebbi that took the second period 6-2.

And in the third period, Kebbi continued to dominate and eventually ended the game 9-4.

In the second game of matchday two, Spain made it back-to-back wins as they defeated Morocco 8-5 in a nervy win.

The Spanish team took the first period 3-0 before coming out tops in the second period 6-2.

Despite a spirited fightback from the Moroccans, the Spaniards held firm to win 8-5.

And after the Spain versus Morocco game, for the very first time, a female celebrity game was played with Super Falcons stars Asisat Oshoala, Onome Ebi and former Falcons goalkeepers Ann Chiejine and Precious Dede in action. 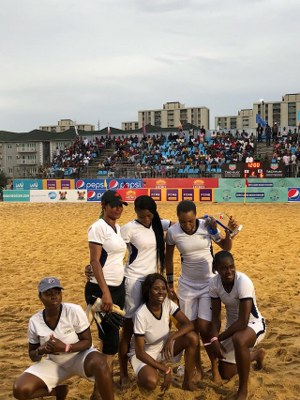 And at the end of the game, team white parading Oshoala, Dede, Chiejine and Onome thrashed their opponents in blue 6-1.

Meanwhile, the Super Sand Eagles will end matchday two of the 2017 COPA Lagos when they take on Lebanon in the fourth game of the day.

Their game will be preceded by Arsenal beach soccer team and Pepsi Football Academy clash.