Spain recorded their first win at the Russia 2018 FIFA World Cup by defeating hard-fighting Iran 1-0 in their second Group B game at the Kazan Arena on Wednesday.

Diego Costa was the match winner for Fernando Hierro’s side in the encounter after they were held to an enthralling 3-3 draw last Friday by Portugal.

The goal took Costa’s tally to three goals in the tournament and second in the scorers chart behind Cristiano Ronaldo, who has four goals.

Iran frustrated Spain in the first half, limiting the 2010 World Cup winners to just one shot on target despite their 80% possession of the ball.

In the 54th minute, Ramin Rezaeian’s awful clearance richocheted off Costa’s shin which left goalkeeper Alireza Beiranvand with no chance as Spain went ahead.

Iran responded six minutes later and were unlucky not to have leveled scores. Mehdi Taremi failed to hit target when he connected Omid Ebrahimi delightful cross into Spanish box.

Iran thought they had equalised in the 62nd minute when Saeid Ezatolahi poked home from inside the box but their celebration was shortlived after the goal was ruled out for offside and handball by the Video Assistant Referee (VAR), much to Spain’s relief. 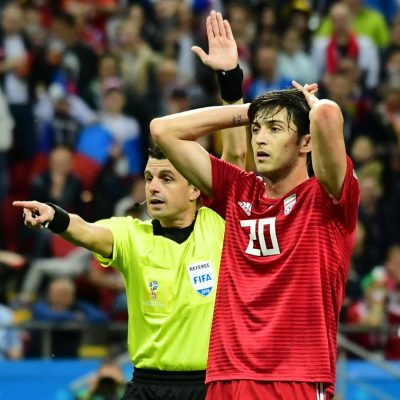 in the 82nd minute, Taremi again failed to make his header count from six yards after connecting well with Vahid Amiri cross from the left flank.

The victory moved Spain level on points with Portugal who also defeated Morocco 1-0 in the other Group B fixture on Wednesday.

Both Portugal and Spain are on the same goal difference heading into their final group game, with Iran on three points. All three have a chance of qualifying for the round of 16.