Not many people know that the biggest name in the history of football is actually an avid poker player enjoying yet another fascinating game as one of his all-favorite hobbies and playing it together with his friends whenever he has some free time. Cristiano Ronaldo had always been keen on demonstrating himself as a passionate poker player by posting videos of him enjoying this game in a company of his close ones. For many years, it seemed as if in most of the cases, Ronaldo simply played for the sake of having fun and spending time with much pleasure just like an amateur user of gambling sites would most probably do.

However, it has recently become known that he went far ahead in his hobby by joining the PokerStars Company and engaging in real duals with iconic poker players of all times. Thus, not so long ago, Ronaldo engaged in a dual with Aaron Paul, which became quite an amusing event, judging from the fact the opponent of Europe’s biggest football player seems to be a truly big fan of Ronaldo himself. He even talked with much passion about how he adored this football giant and how much he was honored to engage in competition against him. As of recently, Ronaldo was rejected the proposition of being included in his nationwide team for another international event mainly because he had sustained too many injuries during the European Tournament. It just seems reasonable that he now has a chance to break a record in a poker duel against an avid and altogether talented poker player.

The biggest name of Portugal and the entire Europe even made a commentary regarding his never-ending passion about poker. He claimed that even though football is his entire universe, poker has always remained his favorite game. He also told how excited he was to become part of the professional team of poker players, simply because he is increasingly interested in everything related to competition and tactics. As such, the Portuguese legend of football has now turned to the web-based and real-time poker tables where he can engage in a competition with not only the professional poker players of all times, but also his own fans. 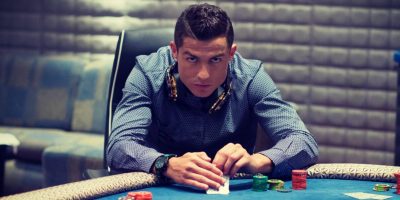 The rivalry between the two iconic stars – Aaron Paul and Cristiano Ronaldo has become a rather out-of-the-box experience for both of them. These two players have adopted different approaches and used different strategies in the course of competition and this could probably be explained by the fact that Cristiano Ronaldo in particular has been playing poker just for fun for too many years while being accompanied by friends and family, but not the world-class poker players.

What is more, it even became known that Ronaldo’s winning in his last encounter with the Breaking Bad’s star amounted to 20,000 dollars, which he entirely spent for charity purposes. Evidently, Cristiano Ronaldo is not only a top-level football player, but also a talented gambler while off the pitch. Obviously, this news has become a sensation across the world of gambling and has hit the lines all over the web. 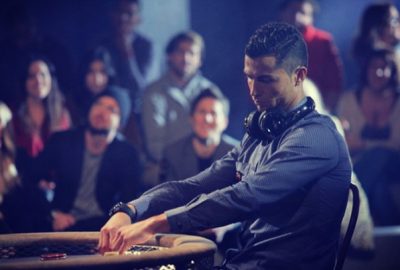 Apparently, Cristiano Ronaldo feels at home while being at a poker table, as if he were at a real-time football pitch going through another match. But the most important part of it all is that he donated his wins for charity, which might be regarded as another attempt to be remembered by many as a generous man. PokerStars remains one of the most popular and reputable poker-related companies across the globe, so Ronaldo has definitely made the right choice and he is currently acting not only as a team player in poker, but also as the trademark’s ambassador.

As such, we are pretty sure that his career in the lucrative world of gambling is going to be long-lasting and highly fruitful and we hope he will achieve even greater heights in any of his undertakings.