Croatia Dump Out Hosts Russia Via Penalties, Set Up Semi-Final Clash Vs England Hosts Russia have been knocked out of the 2018 FIFA World Cup following a 4-3 penalty shoot-out defeat against Croatia in their quarter-final encounter at the Fischt Olympic Stadium, Sochi on Saturday evening.

The scoreline stood at 2-2 after 120 minutes of nervy but exciting football action.

Andrej Kramaric and Domagoj Vida got the goals for Croatia, while Denis Cheryshev and Mario Fernandes were on target for Russia.

Croatia who will be appearing in the semi-finals for the second time in the history of FIFIA World Cup have now suffered only three defeats in their last 23 outings.

Russia went in front in the 32nd minute through a sublime effort from Cheryshev.

The Villarreal man wrapped his foot around the ball from 25 yards before sending a curling effort past Croatia goalkeeper Danijel Subasic.

Sergey Ignashevich failed to close down Mario Mandzukic, who chipped the ball into the middle for Kramaric to nod past Igor Akinfeev.

The game went into extra- time with both teams failing to find a winner after 90 minutes.

Croatia’s second goal came from an unlikely source with Vida nodding the ball home from a corner-kick on 101 minutes.

Russia refused to give up and were rewarded for their effort when Brazil-born defender Mario Fernandes equalised through a header on 116 minutes. 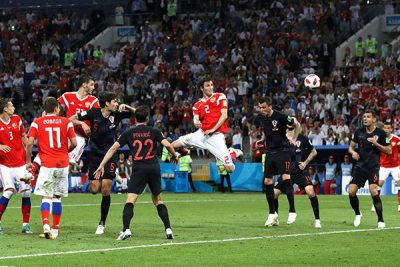 Croatia will face England who defeated Sweden 2-0 earlier in the day in the semi-final on Wednesday. 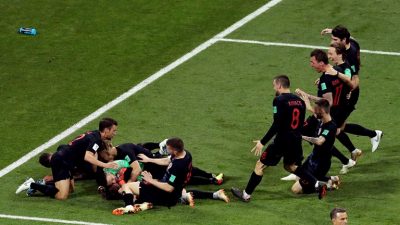