By James Agberebi:   Croatia star Ivan Perisic scored a hat-trick as Inter Milan thrashed Chievo Verona 5-0 in Serie A at San Siro on Sunday.Perisic’s international teammate  provided an assist for the home side second goal.

Both Croatia and Argentina are in Nigeria’s group at the Russia 2018 World Cup.
In the 57th minute, Perisic grabbed his second goal to make it 3-0 to Inter. 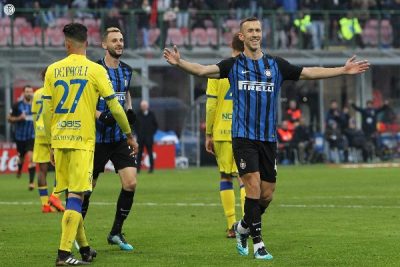 Milan Skriniar scored in the 60th minute to bring score to 4-0 before Perisic completed the rout with his hat-trick goal in the 90th minute.The 28-year-old midfielder has now scored eight goals in 15 Serie A games for Inter this season.On his part, Icardi has 16 goals in 15 Serie A games in the current campaign.The win took Inter to the top of the Serie A table on 39 points, one point ahead of second-placed Napoli.