Frank Lampard has accepted an Football Association charge of improper conduct and a fine of £2,000 following his red card in Derby County’s defeat by Rotherham United.

But the Derby boss says there needs to be better communication between the match officials and managers especially given the yellow and red card rules brought in this season.

Lampard left his technical area in the 77th minute of Saturday’s Championship clash at the New York Stadium and walked 20 yards down the touchline to speak to the referee’s assistant.

He was unhappy about a decision not to award Derby a penalty for hand ball having earlier seen forward Tom Lawrence sent off and a penalty awarded against his side.

Referee Peter Bankes sent Lampard to the stand and the FA issued a charge Monday.

“I have accepted it, I think it was the right thing to do,” Lampard, who will be on the touchline for Derby County’s home game against Blackburn Rovers tonight (Tuesday) told Derby Telegraph.

He added: “It is a new rule this year, yellow and red cards. I suppose my issue with it was that other managers and assistants are leaving their technical areas all of the time to talk to fourth officials, shouting at the referee or the linesman, and it is not being dealt with.

“Consistency is a problem, but that is not my argument to fight, that’s for the FA to sort out and make the right decisions.

“The referee was very quick to get the red card out, make of that what you will, but I have accepted it.

“I saw their (Rotherham’s) manager and assistant out of their technical area, I saw a manager celebrating on the pitch with his players at the weekend – which actually I like. I think we have got to be careful not to take away too much emotion.

“I thought may be a slap on the wrist and a ‘get back into your technical area’ would have been sufficient, and I wouldn’t have gone out again.

“I won’t go again, but I am emotional watching the game. Every decision went against us, on reflection even more than I thought in real time. 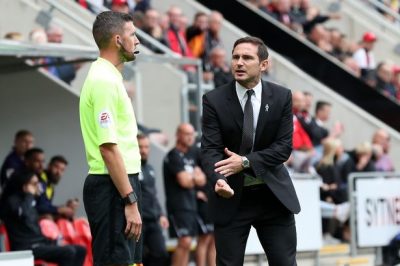 “Maybe the ref could have said ‘get back in your box’, and that would have been it. It’s done, I’ll accept the fine and move on.

“It is not in my nature. You get into the game, I want to win football matches and probably some of my frustration was we were not playing as well as we should have done on the day.”

Lampard believes communication is an issue.

“If you are going to give referees a yellow card and a red card there needs to be communication in between that,” he said.

“Fortunately, I am not going to miss a game. I’ll take the fine in good faith and have learned my lesson.”