Sweden and Mexico are through to the round of 16 of the 2018 FIFA World Cup in Russia after a dramatic afternoon of Group F action.

The Swedish side defeated Mexico 3-0 at the Ekaterinburg Arena on Wednesday as both qualified following Germany’s 2-0 loss to South Korea.

Mexico, who needed just a point from the game to advance to the next round from the group, went down courtesy of second-half goals from Ludwig Augustinsson, Andreas Granqvist and an own goal from Omar Alvarez.

Mexico had more possession of the ball in the first period, and also had several shots on goal with just just one of those was on target. 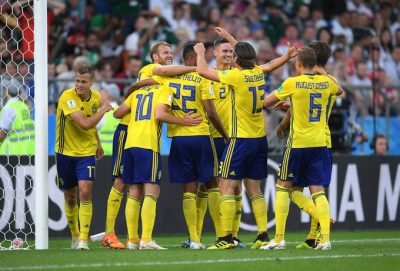 Six minutes into the second half Sweden were ahead. Augustinsson’s stunning striker beat Leonardo Ochoa from the edge of the box.

Granqvist doubled Sweden’s lead in the 63rd minute from the penalty spot after Moreno brought down Marcus Berg in the box.

An own goal from a Mexican defender Alvarez made it 3-0 after he turned in a cross past his goalkeeper in the 75th minute.

In the other Group F game, Germany crashed out of the competition after losing 2-0 to South Korea.

Goals in additional time from Young-Gwon Kim and Heung-Min Son sent the defending champions out of the competition.

The defeat means Germany exit at the first hurdle for the first time since 1938.
It is also the third successive tournament the reigning champions exited in the group stages, after Spain’s early exit in 2014 and Italy’s in 2010.

Despite the famous victory, South Korea also exit the tournament, with Sweden top of the group and Mexico second. Germany finish bottom, with Korea third.