AS Roma striker Edin Dzeko reckons Chelsea are among the contenders to win the Champions League but the Bosnia and Herzegovina forward has very modest expectations of his own team as the Italian side prepare to face the Premier League holders at Stamford Bridge on Wednesday evening.

Antonio Conte steered the Blues to the domestic title in his first season in charge in England, although they have struggled somewhat in their last two matches, losing at home to Manchester City and away to bottom side Crystal Palace. 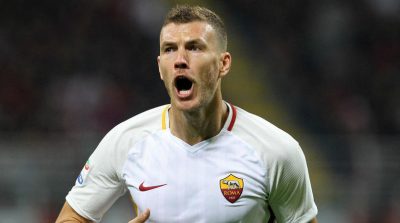 Despite that slump, former City striker Dzeko knows the Giallorossi will face a tough task up against the Group C leaders in west London.

“They are a very good team,” he told the Guardian.

“I watch the Premier League every weekend and I was impressed with them last season. Conte gave them a different dimension, I would call that an Italian dimension.

“They are packed with fantastic individuals and a joy to watch, and no team can say it will be easy to go to Stamford Bridge and beat them.

“They are one of the teams that can win the Champions League this season.”

Of Roma’s aspirations in Europe, he added: “Well, we are not here to win the Champions League. We have different goals, different class. The first aim is to reach the knockout stages.”