EAGLES BEWARE! Why A Draw Against Argentina May Not Be Enough For Second Round Ticket The Super Eagles clawed back from the brink of elimination at the 2018 World Cup with a sturdy 2-0 victory over Iceland which sent millions of Nigerians, and indeed, many Super Eagles fans across the world, into delirious ecstasy.

Now, from being the basement team, Nigeria has been catapaulted into second place, behind leaders Croatia who have a perfect six points from two games. Iceland and Argentina bring up the rear with a point each. 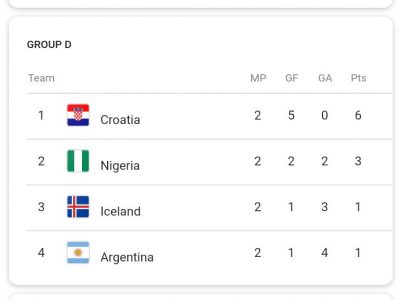 Going into the last round of games which pair Nigeria with familiar foes Argentina and Iceland against already-qualified Croatia, what is the minimum that Nigeria need to do to make it out of the group stage into the next round of the competition?

Contrary to the assertion by many pundits that a draw against Argentina will be enough to see the Super Eagles through, the rules of the competition according to FIFA does not substantiate this position.

Firstly, it must be established that none of the teams has been eliminated at this point. While Croatia are safely qualified, any one of Nigeria, Iceland and Argentina could join them in the next round depending on the results of their last group games.

As it were, it is possible for two teams to end up on four points, but not all three of them. If Nigeria draw against Argentina, the Super Eagles would finish with four points, same as Iceland in the event of the Vikings beating Croatia.

Alternatively, it could end up being Iceland and Argentina ending up on four points apiece if Iceland win against Croatia and Argentina get the better of Nigeria.

According to Regulations Article 32.5 of the rules guiding the competition, if two or more teams are tied on the same points, the following will be used to determine the team that goes through:

In the unlikely event that both Iceland and Nigeria are still tied after using the above two criteria, then the team that goes through will be determined as follows –

As it stands, Nigeria have three points and will certainly qualify if they beat Argentina by any margin of victory and regardless of what Iceland are able to do against Croatia in the other game.