With Nigeria’s Super Eagles reliant on Odion Ighalo as the first choice striker ahead of the 2018 FIFA World Cup in Russia, Completesportsnigeria.com’s JOHNNY EDWARD picks out nine alternatives or back-up striker’s for the struggling Changchun Yatai hitman…

Sadiq Umar, 21, has been a revelation since he moved from AS Roma on loan to Dutch Eredivise side NAC Breda in the January transfer window.

The tall striker was one of the standout players for Nigeria at the 2016 Rio Olympics in Brazil where he scored four goals in six games as the team won men’s football bronze. He has also been playing a crucial role AND Breda’s survival in the Eredivisie.

Umar has bagged four goals and made three assists in eight appearances for NAC Breda who are currently 15th in the league table.

The former Torino player is blessed with a good height and could be a big threat to opposing defences at set pieces due to his physical prowess if called up to the Super Eagles squad.

Due to his height, he may not look fast, but he’s quick. While he’s not the most technical player, he’s not too shabby either; his ability to use his strength to hold onto the ball somewhat masks that ‘weakness’ in his game.

The former Flying Eagles striker, Taiwo Awoniyi is having a great season with Royal Excel Mouscron since signing from Liverpool on a season loan deal in the summer.

The striker has scored nine goals, provided six assists so far this season in 30 games. The 21 year old has been impressive in his hold up play this season and has also shown that he can perform as a lone striker.

But he hit a bad patch this season when he signed for Manchester City and was shipped out on loan to Girona where he could only manage two assists in 13 appearances.

Gernot Rohr is believed to be an admirer of the 24-year-old, whose performances for Austria Wein last season earned him a call-up to the national side for the 2019 Africa Cup of Nations qualifier against South Africa.

Kayode is a clinical finisher who has good pace and strength to keep opposing defenders busy for the entire duration of a game which Odion Ighalo currently lacks. He broke his deadlock for Shakhtar Donestk last weekend on his debut against Zorya Luhansk and he will be hoping to make it two goals in two appearances this weekend.

The former Maccabi Netanya of Israel star could prove to be the joker for the Super Eagles if considered for selection for the 2018 World Cup in Russia.

One of Fanendo Adi’s biggest assets is his ability to overpower defenders wherein he gets most of his goals from. The Super Eagles need a striker who can bully his way through the tightest defence. Adi’s big size is also another quality which equally makes him a big threat in set pieces.

The 27-year-old striker scored 12 goals last season in 25 games but since returning from a long-term injury this season he is yet to get off the mark.

Big, tall Paul Onuachu was in electric form this season for Midtjylland and he has been ranked among the best strikers in the Danish League, scoring 16 goals in 25 games. His development since he became the focal point of Midtjylland’s attack has been remarkable.

Onuachu, just like other strikers listed, will certainly bring something a bit different to the Super Eagles attack as few players in the team can match him for pace at the moment in the squad.

However the chances of being included in the squad are slim as he is still recuperating from an injury that has kept him out of action since February.

The most experienced striker from this list is Brown Ideye. The 30-year-old striker has played in seven different leagues (Switzerland, France Ukraine, England, Greece, China and Spain) in his career abroad and has usually scored goals.

Having represented Nigeria in four major tournaments (the FIFA U20- World Cup in Canada, the 2010 FIFA World Cup in South Africa, 2013 Africa Cup of Nations in South Africa and the 2013 FIFA Confederations Cup), the Malaga forward is well aware of the pressure that comes with leading the line for the three-time African champions and having to justify it with goals.

Ideye could lead the attack well and also play as a second striker. He is strong in the air, brilliant at linking up play and is comfortable holding up play for his teammates to get into the game. He will be a great asset if he is considered.

The 24-year-old is a huge talent that has taken the Nigerian Professional Football League by storm, playing for Kano Pillars this season.

It would to be a big call for Gernot Rohr to make for room Lokosa to be included in one of the international friendlies lined up for the Super Eagles but if he does take the risk, the German will be assessing a striker who has pace, dribbling skills, and finishing abilities that have seen him bag an impressive 14 goals in 14 games in the Nigerian Professional Football League for his side, Kano Pillars, this season.

Belgian-born Nigerian striker Cyriel Dessers, who has already opted to play for the Super Eagles, could also be a good option in the striking role for Nigeria ahead of the World Cup in Russia.

The 23-year-old is pacy and strong on the ball. He is also blessed with great finishing skill and accurate shots. He is also a fearless forward who likes to tackle.

Dessers has been prolific in the past two seasons in the Netherlands and he is reportedly on the radar of the technical crew of the Super Eagles but it remains to be seen if the former Belgium U-21 striker’s can make a timely switch before the World Cup in Russia.

Dessers, whose mother is Nigerian, was a huge hit with Dutch club NAC Breda last season in the second division as he scored 29 goals and made 13 assists in 40 games as they won promotion back to the top league.

And so far in the Eredivise this season, the former Lokeren striker has bagged 11 goals in 31 games with five assists. 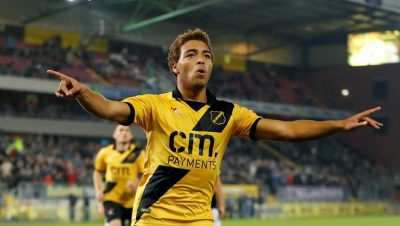 With 12 goals in 32 appearances for Club Brugge in the Belgian top flight, Dennis Bonaventure is another player who has the quality to compete for a place in the Super Eagles attack. Bonaventure is a deadly finisher with a brilliant first touch, great passing ability and decent dribbling skills.

He also possesses good quality and strength in holding up play that him a dangerous player in the final third. He is regarded as a predator in the penalty area. Dennis can also play on the wing but is a genuine striker, who loves to play in the box. 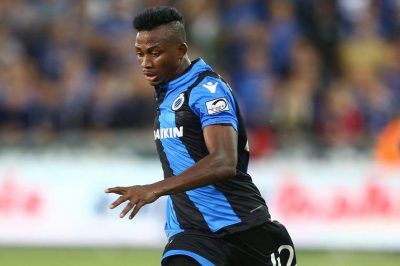