The Super Eagles had their first training session on Thursday after arriving London ahead of Saturday’s high profile international friendly game against the Three Lions of England at Wembley Stadium, Completesportsnigeria.com reports.

The team had their first training at The Hive Stadium, home ground of Barnet FC, who play in the English National League (fifth-tier).

Chelsea star, Victor Moses, who joined the team’s camp on Thursday morning was part of the training which started at 4:30pm.

Complete Sports’ Semiu Osho who witnessed the team’s training reports that the team was split into two groups comprising the possibles and the probables. 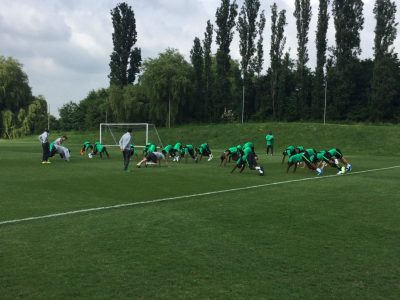 Ikechukwu Ezenwa was in goal for the probables with the defence comprising Tyronne Ebuehi who seems to have recovered from the cramps he suffered against DR Congo on Monday in Port Harcourt, Kenneth Omeruo, Chidozie Awaziem, Elderson Echiejile, John Ogu, Oghenekaro Etebo, Kelechi Iheanacho, Ahmed Musa and Crotone of Italy star Simeone Nwankwo.

Mikel,Abdulahi and Iwobi dazzled for the probables with the Arsenal player showing flashes of brilliance while for the probables new boy Nwankwo’s hold up play was impressive as he showed great strength on the ball.

Today (Friday), the team will hold their first official training inside the famous Wembley Stadium by 5pm.

The training will be preceded by a press conference also at Wembley Stadium at 4:15pm.