Eintracht Frankfurt produced one of the biggest upsets in the history of the DFB Pokal (German Cup) as they stunned Bundesliga champions Bayern Munich 3-1 in Saturday’s final.

A brace from Ante Rebic and another goal from Mijat Gacinovic gave Frankfurt the shock win against the highly fancied Bayern side.

Frankfurt went 1-0 up when Rebic struck in the 11th minute. 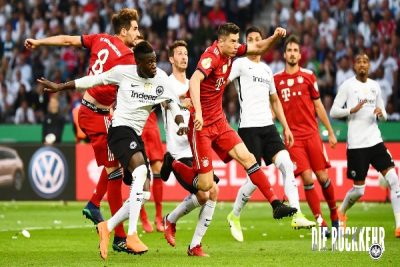 With eight minutes remaining, Rebic grabbed his brace to make it 2-1 to Frankfurt.

And in the 90th minute Gacinovic made sure of the win by adding the third goal.

Frankfurt’s have now won five DFB Pokal titles and this season’s title is their first since1988.

Frankfurt, whose coach Niko Kovac will be joining Bayern next season, lost in last year’s final 2-1 to Borussia Dortmund.