Blessing Eleke scored a brace for FC Luzern in Sunday’s 2-2 draw away at Grasshoppers in the Swiss Super League reports Completesportsnigeria.com.

Eleke gave his side an early lead in the second minute for his sixth league goal of the season. Nedim Bajrami drew Grasshoppers level in the 11th minute but Lazar Cirkovic restored Luzern’s lead in the 18th minute.

Julien Ngoy strike for Grasshoppers looked to have earned the home team a point but Eleke bagged the match winner in the 79th minute after he was played through on goal by with a fine assist from Pascal Schurpf.

The goal was his seventh league goal of the season and his 11th in all competitions for FC Luzern.

Also in Switzerland, Stephen Odey fired blanks in FC Zurich’s 2-0 loss away to FC Basel 1893. Odey has scored six league goals and ten in all competitions.

In Spain, Moses Simon was an unused substitute for Levante who came from a goal down to force a 4-4 draw with Eibar away from home.

The Nigerian winger has made four substitute appearances for Levante this season six in all competition this season with two in the Copa Del Rey.

The result sees Eibar remain in mid-table, whilst Paco Lopez’ side, Levante miss out on the opportunity to climb into the top four. 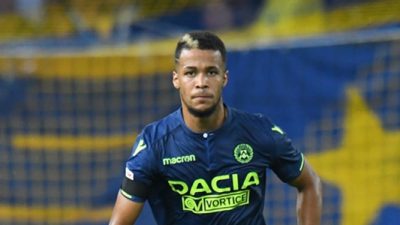 In Italy, William Troost Ekong was on the losing side with Udinese who slumped to a 3-1 loss at home to Atalanta on Sunday in a Serie A game. Ekong has made 15 Serie A starts this season.

At the Ennio Tardini stadium, Joel Obi made his 10th start for Chievo Verona who held Parma to a 1-1 draw. His only goal in the Serie A was against Bologna in October.

In Turkey, Abdullahi Shehu was left out of Bursaspor’s squad that lost 2-0 at home to Antalyaspor.

Shehu has made only one appearance this season for Bursaspor and last featured as a right midfielder in their 1-0 win over Ankaragucu in October.

Shehu is currently recuperating from a thigh muscle injury he sustained while on international duty with the Super Eagles.