Gianluigi Buffon ended his career with Italian club Juventus on a high as the club defeated Hellas Verona 2-1 in their Serie A clash  on Saturday.

Daniele Rugani and Miralem Pjanic got the goals for Juventus, while Alessio Cerci got Hellas Verona’s only goal of the game.

The Italy legend announced his decision to leave the Serie A giants on Thursday, bringing a close to his 17-year spell at the club.

The 40-year-old was substituted in the 64th minute in front of a packed out Allianz Arena amid standing ovation from the fans. 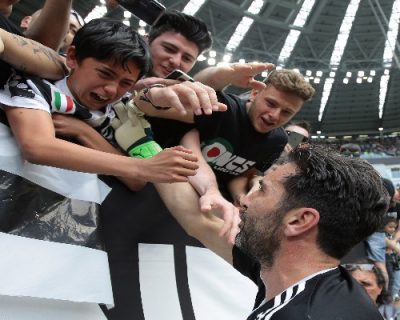 Buffon’s slow walk off the pitch brought tears to supporters’ eyes as he hugged both team-mates such as Claudio Marchisio and Paulo Dybala as well as members of the opposition.

Befittingly, Buffon did notconcede a goal during his 64 minutes of action. However, Juventus did let one in after he was substituted.

Prior to kick-off, the shot-stopper took time to say goodbye to some of the fans closest pitch side.

The veteran goalkeeper won the domestic double with the club in his final season with them.