England coach, Gareth Southgate, has admitted that his side struggled to contain the Super Eagles’ halftime tactical switch in their 2-1 win in Saturday’s international friendly at Wembley Stadium London.

The Three Lions completely bossed the first half and deservedly went 2-0 up through Gary Cahill and Harry Kane.

But in the second half, Super Eagles coach Gernot Rohr made some changes which saw a better response from his team and they reduced the deficit through Alex Iwobi’s goal.

In his post-match press conference on English Football Association’s official website, Southgate however described the game as a good test for his team going to the World Cup.

“I think we played really well, with the ball especially,” he said.

“We created a lot of good chances, far more than in recent games. I was really pleased with that.

“We were deservedly a couple of goals to the good at half time.

“In the period leading up to their goal they changed the system and it took a little while to work out how to deal with that.

“Once we did that, we managed the game pretty well but there was a six or seven-minute period where we didn’t adjust and it was decent exercise for us although we wanted it to be a little bit more comfortable.” 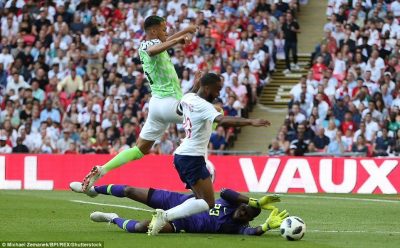 Southgate also praised his front players for their performance.

“I thought he [Raheem Sterling] played well. I thought the front four – some of the movement and inter-play – we looked a threat.

“I thought Dele [Alli] and Jesse [Lingard] made great unselfish runs from midfield and as I say, slightly better decision making in the final third we would’ve scored even more.”

England’s next friendly comes up on Thursday against Costa at Anfield.

The Three Lions will face Tunisia, Belgium and Panama in Group G at thile 2018 World Cup in Russia.