The  English Football Association have defended Manchester City winger  Raheem Sterling amid criticism of his decision to have a gun illustration tattooed on his right leg.

The winger’s tattoo has been dubbed inappropriate by anti-gun groups and some tabloids.

But  the FA sprunged to the defence of the England international when he revealed the meaning behind the symbol.

Sterling took to Instagram to explain the reason behind the action, insisting that he got the tatoo to remind him of his vow never to become involved with firearms due to the death of his father in a shooting. 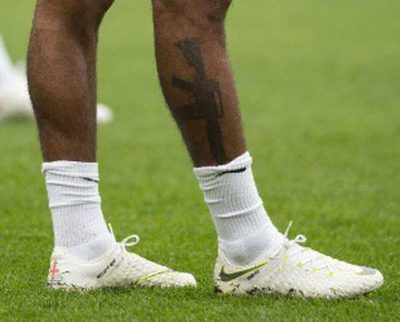 “We all support Sterling and acknowledge the honest and heartfelt account he gave,” said the FA in a statement.

“He and the rest of the squad are focused solely on preparing for the forthcoming World Cup.”