The official prize money received by each of the 20 English Premier League clubs for the just ended season has been revealed, with second-placed Manchester United receiving more more than any other club. 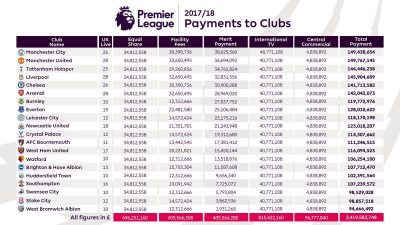 Arsenal finished sixth in the league but they got about £300,000 more than fifth-placed Chelsea.

The payments are determined by final position in the league and how many times a club’s games are broadcast live in the United Kingdom and internationally as well as facility fees and other factors.

United, with the biggest fan base in the UK, had the most games on television (28) along with Liverpool and Arsenal, while City had 26.

West Brom, who finished bottom of the league and got relegated, received the lowest payment with over £94m.