Super Eagles duo, Wilfred Ndidi and Kelechi Iheanacho put up a fine performance as Leicester City went down to a 2-0 defeat against Manchester United in the opening game of the 2018/2019 English Premier League season at the Old Trafford on Friday, reports Completesportsnigeria. com.

Iheanacho, who led Leicester City’s attack in the game proved a handful for the United’s defence even though he was not able to find the back of the net.

His compatriot, Ndidi also put in a fine performance and stood up to the duo of Paul Pogba and Fred in the Red Devils midfield.

Iheanacho and Ndidi featured for the entire 90 minutes in the game.

Paul Pogba opened scoring for the hosts from the spot in the third minute after Daniel Amartey was adjudged to have used his arm while trying to control Alexis Sanchez ball into the box. 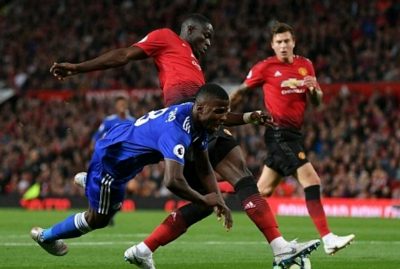 Left-back, Luke Shaw made the points save for Jose Mourinho’s men when he nodded the ball home seven minutes from time.

Substitute Jamie Vardy make the scoreline more respectable for Leicester City when he hit the back of the net in the second minute of added time.