EPL: Southampton Win At Swansea City To Move Out Of Relegation Zone Southampton boosted their chances of avoiding relegation by defeating Swansea 1-0 in Tuesday’s English Premier League game at the Liberty Stadium, reports Completesportsnigeria.com.
The first half ended goaless.
At the start of the second half, both teams struggled to get into their strides and in the 72nd minute
Manolo Gabiadini scored for Southampton. 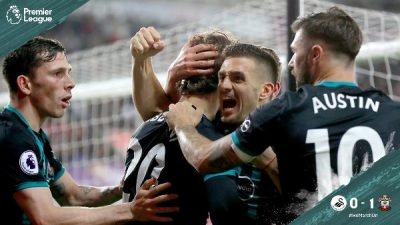 The goal handed Swansea City their third defeat at the Liberty Stadium in 2018.
The win ensures the Saints move out out of the relegation zone, but will fight for their final safety on the last day of the season.
Southampton now occupy the 16th position with 36 points from 37 gamesp while Swansea are 18th  on 33 points, also from same number of matches played.
Copyright © 2020 Completesports.com All rights reserved. The information contained in Completesports.com may not be published, broadcast, rewritten, or redistributed without the prior written authority of Completesports.com.