Etebo caught the eyes of many with a string of outstanding performances for the Super Eagles at the 2018 FIFA World Cup in Russia.

He revealed that a decision on his future would have been made after the World Cup Finals had he not been so impressed by the vision and ambition of the Stoke City hierarchy and promptly sealed the deal before the tournament.

“I feel great, I am finally here and I really appreciate the support and the welcome that everybody has given to me,” Etebo told Stoke City+.

“Everybody needs a break after a tournament like the World Cup, but my mind has been here, I knew that I was coming to Stoke City and I was excited about it.

“I spoke to a lot of friends about the move and the tradition of this Club appealed to me – everybody knows that this is a big Club, even though we suffered relegation last season. 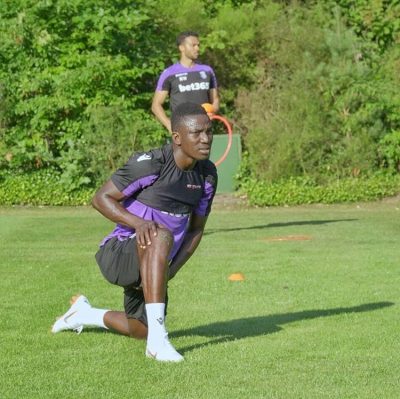 “It is important for us to do well this season, to make sure that everything goes well in the future, but I know how difficult a challenge this will be.

“I had a lot of options this summer from the Premier League, but I signed this deal before I went to the World Cup, and I am happy with that.

“I did that because of the relationship and the conversations I had. I was happy with what was said – if I wasn’t then I wouldn’t have come to Stoke City.”

The former Warri Wolves midfielder also believes thatvthe upcoming season will be a successful one for the club.

“I believe that we are going to make this a great season. I am going to give my best and hopefully, that will be enough for the Club.” Etebo added.