Atletico Madrid are through to their third UEFA Europa League final after they defeated Arsenal 1-0 in the second leg of their semi-final tie to advance 2-1 on aggregate at the Wanda Metropolitano on Thursday.
The match was Wenger’s last one in Europe as Arsenal coach after 22 years with the Gunners.
Two-time Europa League winners Atletico will face the winner of tie involving Olympique Marsellie and RB Salzbug in the final.
Former Chelsea striker Diego Costa, who tortured Arsenal while he was in England  gave Atletico Madrid the lead on the stroke of half time after receiving a pass from Antoine Griezmann at the Wanda Metropolitano. 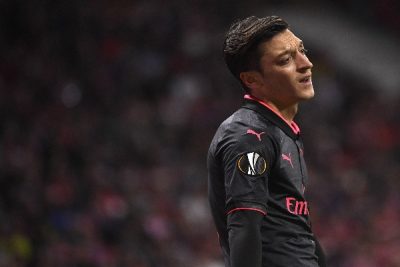 Arsenal kicked off the game playing impressively and created some chances to score in the opening minutes of the game but failed to take their chances when Alexandre Lacazette and Jack Wilshere had the opportunity.
The Gunners also suffered a setback as their captain Laurent Koscielny was forced off with an injury.
Hosts Atletico grew into the game and almost went ahead in the seventh minute when Costa fended off a challenge from Koscielny and Nacho Monreal but the Spanish striker could not beat David Ospina at the near post with his toe-poked shot going wide.
The game was evenly balanced until a defensive lapse from the Gunners backline in the final minutes of the first half allowed Costa to burst into the box and score from a pass from Griezmann.
The second half saw Atletico Madrid sit back to exploit the space in the Gunners defence on the counter. Costa, substitute Fernando Torres and Koke all had half chances to put the game beyond Arsenal’s reach but they all missed.
The final is biilled to hold on the 16th of May at the Parc Olympique Lyonnais in France.
Copyright © 2020 Completesports.com All rights reserved. The information contained in Completesports.com may not be published, broadcast, rewritten, or redistributed without the prior written authority of Completesports.com.