By James Agberebi: Arsenal made it back-to-back wins in Group H with their 4-2 away victory against Belarus’ Bate Borisov in the 2017/2018 Europa League on Thursday.

Theo Walcott opened scoring for Arsenal on nine minutes before adding a second in the 22nd minute to make it 2-0.

In the 25th minute, Rob Holding scored to put Arsenal 3-0 up but Borisov pulled a goal back through Mirko Ivanic three minutes after Holding’s goal.

Arsenal restored their three-goal advantage as Olivier Giroud converted from the penalty spot in the 49th minute for Arsenal’s four goal and his 100th goal for the London club.

Borisov scored again, this time through Mikhail Gordeychuk on 67 minutes.

The win means Arsenal maintain leadership in Group H on six points while Borisov are third on one point.

In Group G, Super Eagles invitee, Anthony Nwakaeme, was on target for Hapoel Beer-Sheva of Israel but it was not enough as they lost 3-1 away to Viktoria Plzen of Czech Republic.

Nwakaeme, who came on in the 62nd minute, scored in the 69th minute to make it 1-1. Also in action for Hapoel was John Ogu who played for 90 minutes.

Despite the defeat, Hapoel are second in Group G on three points, three behind leaders FC FCSB of Romania.

And in Group I, Nigerian forward Imoh Ezekiel was an unused substitute for Konyaspor who beat visiting Vitoria de Guimaraes. 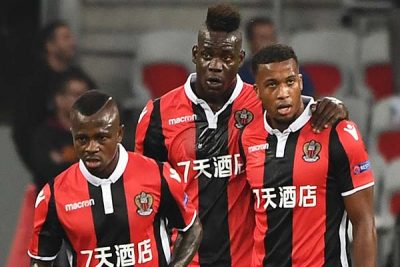 And in the early kick-off FC Astana from Kazakhstan were held to a 1-1 draw at home by Czech Republic’s Slavia Prague.