By Adeboye Amosu: Nigeria forward Alex Iwobi limped off injured on Thursday night as Arsenal advanced into the next round of the Europa League despite going down to a 2-1 defeat against Swedish club Ostersunds in their Round of 32 second leg fixture at the Emirates Stadium.
Iwobi was substituted in the 92nd minute with Reis Nelson taking his place after the Super Eagles star went down injured. He received treatment on the pitch before limping off.
It was Iwobi’s 27th game in all competitions for the Gunners this season  and he has recorded two goals and four assists.
Ostersunds Nigerian striker Alhaji Gero was left on the bench for the whole game.
The visitors scored two quick goals in the 22nd and 22rd minutes courtesy of Callum Chambers own goal and Ken Sema strike.
Saed Kolasinac netted Arsenal’s only goal of the game two minutes after the break. 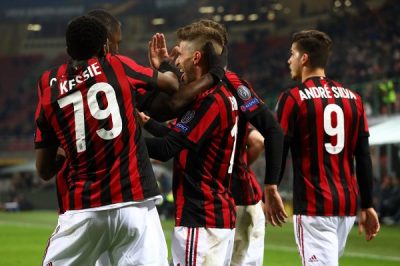 Former European champions AC Milan also secured their passage into the Round of 16 after a 1-0 win against Ludogorets of Bulgaria at the Giuseppe Meaza Stadium.
The Italians advanced on 4-0 aggregate scoreline.
Austria’s Red Bull Salzburg knocked out Real Sociedad of Spain following a hard-fought home  2-1 win, edging the contest 4-3 on aggregate,  French giants Olympic Marseille also moved on in the competition despite going down to a 1-0 defeat against Sporting Braga of Portugal.
Marseille  qualified 3-1 on aggregate.
Marcel Schmelzer scored a late goal for Borussia Dortmund who drew 1-1 with Italy’s Atalanta but progressed 4-3 on aggregate.
FULL RESULTS
AC Milan 1-0 Ludogorets (Agg 4-0),
Arsenal 1-2 Ostersunds (Agg 4-2)
Atalanta 1-1 Dortmund (Agg 3-4)
Ath. Bilbao 1-2 Spartak Moscow (Agg 4-3),
Braga 1-0 Marseille (Agg 1-3),
Salzburg 2-1 Real Sociedad (Agg 4-3)
Copyright © 2020 Completesports.com All rights reserved. The information contained in Completesports.com may not be published, broadcast, rewritten, or redistributed without the prior written authority of Completesports.com.