Arsenal manager Arsene Wenger has admitted that the Gunners’ profligacy in Thursday’s UEFA Europa League second leg semi-final cost them a place in the final.

Diego Costa’s goal in additional time of the first half gave Atletico Madrid a 2-1 aggregate win which denied Wenger a last chance to lift a silverware.

“It was a similar game to what we had in the first leg. The dangerous situations we created were there, but we missed something in both boxes,” Wenger told BT Sport. 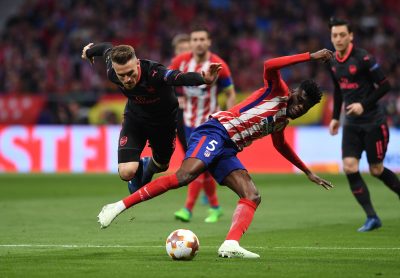 “We played a good team and good luck to them in the final, but we feel we did enough to go through. We didn’t manage the important moments of either game well. We were 1-0 up with ten minutes to go at home, and then we conceded a stupid goal. Tonight we looked OK and then conceded on the counter attack.

“Atletico played with fear in the first half that if we score they could be out, but once they scored they played with a cushion. We lost possession and Diego Costa is one of the best strikers in the world.”

Wenger also revealed that Laurent Koscielny ruptured his achilles and a scan will determine for how long he will be out of action.

“It is an Achilles rupture and maybe we will have good news, but the first signs are not very good.”

“You can always hope that the scan will say something different but the first signs aren’t very good.

“It looks like it could be ruptured although I’m a bit cautious – no-one can say that clinically at the moment.”

“That depends on the scan. If he has ruptured it the chances are non-existent.”