Arsenal moved a step closer to securing a place in the semi-finals of the UEFA Europa League after securing a comfortable 4-1 win against Russian club CSKA Moscow in the first leg of their quarter-final tie at the Emirates Stadium on Thursday.

Aaron Ramsey and Alexandre Lacazette scored a brace each for the Gunners in the encounter, while Aleksandr Golovin got the visitors’ only goal.

Super Eagles winger Alex Iwobi came on as a substitute for Henrik Mkhitaryan in the 61st minute for Arsenal, while Ahmed Musa started the game as a centre forward for CSKA Moscow, but was substituted in the second half. 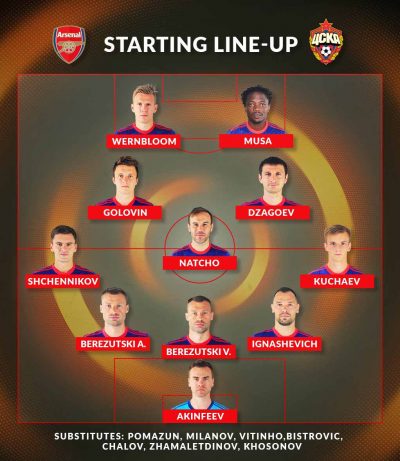 Musa came close to putting CSKA Moscow ahead in the first half with scores at 1-1 but he only found the side netting after skipping past an Arsenal defender in the box.
At the Estadio Wanda Metropolitan, Atletico Madrid also enjoyed a comfortable evening following a 2-0 win against Portuguese outfit Sporting Lisbon.

Diego Simeone’s men got off to a good start when Spanish international Koke put them ahead after just a minute, while Antoinne Griezman added the second five minutes before the break.

In Rome, Lazio beat Salzburg 4-2 in a thrilling encounter.

Valon Berisha and Takumini Minamino got the visitors’ goals.