Awoniyi who is loan at the club from Liverpool opened scoring for Gent in the 13th minute and was replaced in the 77th minute by Jonathan David who scored his side’s third goal of the game.

Gent qualified into the play-off stage 4-1 on aggregate having edged the first leg 1-0.

In another game, former U-23 Eagles striker, Umar Sadiq, was an unused substitute in Scottish side, Glasgow Rangers O-0 away draw against Maribor, progressing 3-1 on aggregate.

There was also joy for the quartet of Philip Azango, Reuben Yem, Abdul Zubairu and Emeka Umeh who made it to the next round with Slovak’s outfit AS Trencin after a 1-1 away draw at Feyenoord.

The Quartet were in action in the game with Trencin winning 5-1 on aggregate.

Blessing Eleke however ended on the losing side as his Swiss club, Luzern were knocked out 7-1 on aggregate following a 3-1 home defeat to Olympiacos Greece. 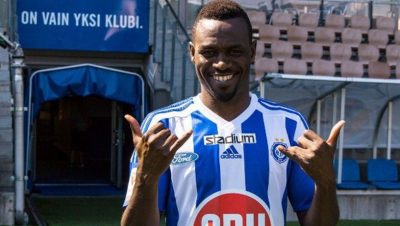 Former Golden Eaglets forward, Chrisantus Macaulay, was on target for Finnish club, HJK Helsinki who lost 4-1 at home to Olimpija of Slovenia in the second leg of their UEFA Europa League third qualifying round clash also on Thursday.

HJK exited the competition 7-1 on aggregate having lost the first leg 3-1 away from home last week.

Macaulay who came in as substitute for Jordan Dominguez in the 64th minute scored HJK’s consolation goal five minutes from time.

The other Nigerian at the club, Faith Obilor was on for the entire 90 minutes.

At the Neo GSP Stadium, Levkosia, the duo of John Ogu and Anthony Nwakaeme were both in action in Hapoel Be’er Sheva’s 3-1 loss to Cypriot club, APOEL Nicosia.

APOEL progressed 5-3 on aggregate with the first leg ending in a 2-2 draw.

Former Super Eagles defender, Efe Ambrose also saw his Scottish club, Hibernian go out of the competition after they were thrashed 3-O by Molde of Norway.

Daniel Chima was an unused substitute for Molde in the game.

It was a different story for the duo of Paul Onuachu and Ogochukwu Frank who were involved in Danish side, FC Midtylland 3-1 win against Welsh outfit, The New Saints at the MCH Arena, Herning.

Midtylland edged the contest 5-1 on aggregate.

Another Nigerian, Emeka Eze featured for 17 minutes in Austrian club, Sturm Graz 6-0 defeat at the hands of AEK Larnarca of Cyprus, bowing out 7-0 on aggregate.