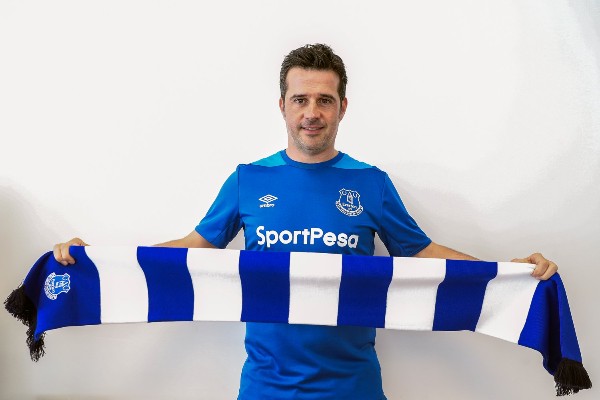 Everton have appointed Marco Silva as their new manager, the Premier League club announced on their official website on Thursday.

Nigeria forward Henry Onyekuru is an Everton player, although he spent last season on loan at Anderlecht.

“Marco Silva has revealed his pride at being appointed Everton manager and his resolve to build a winning side with a winning style and a deep connection between the team and Evertonians,” Everton stated.

“The 40-year-old Portuguese confirmed himself as one of Europe’s most talented young bosses in trophy-winning spells in charge of Sporting Lisbon and Olympiakos after overseeing the remarkable rise of GD Estoril in his homeland.

“Silva introduced an ambitious and expressive style of football at Hull City following his move to the Premier League in January 2017 and effected a similar transformation in playing philosophy at Watford after taking over at Vicarage Road last summer.”

Director of Football Marcel Brands described Silva as a manager “who wants to play attractive, attacking football and also wants to work in the structure we have at Everton” and Silva believes the fans will be proud of what they see on the pitch next season.

“I’m really proud to be the new Everton manager,” Silva told evertontv. “I’m excited and I’m really happy to take this big challenge for us as a club and for me as a manager.

“I want to express my thanks to Farhad, to the Chairman, to the Board of Directors and to Marcel as well for the confidence in my work. I know the huge history of Everton as a club and what the fans expect. I’m sure with everybody working together I will be ready for this challenge.

“We have a lot of work to do in this next month and it is important to prepare everything in the right way. But there will be even more important work to do from the start of pre-season into the first Premier League match of next season.

“I know what our fans expect – they expect results but not only results. I want our fans to be proud when they see our team on the pitch. I want them to feel that we are committed, that we are working hard and enjoying our football because that is important as well.

“We want to build a great connection between the squad and the fans, and I’m sure that with our attitude and demands of commitment then our style of play will see that, I believe.

“Everton is a really ambitious club and that is what I want. What we are seeing now are good changes at the Club. The Club is changing its approach. But one thing we cannot change and nobody wants to change is the huge history and ambition of the Club.

“Everybody knows Everton’s history. When you are a club like Everton, you only have one solution – to aim to win. In football it is impossible to win every match but we must do everything to show in every game that we have ambition. That is what I want and I’m sure we will show that every single week.”