Former Brazil coach, Carlos Alberto Parreira will head the FIFA Technical Study Group for the 2018 FIFA World Cup in Russia according to a report on FIFA.com.

The FIFA Technical Study Group (TSG) which has been present at every FIFA World Cup since 1966 is saddled with the responsibility of analysing the matches of FIFA’s flagship event and evaluate statistical data using the latest technologies also has former Super Eagles left-winger, Emmanuel Amuneke as a member.

Parreira led Brazil to the 1994 World Cup title and holds the record for appearing in the most World Cup finals as a coach, with six appearances.

Former Super Eagles assistant coach, Emmanuel Amuneke who has been named ins the group will be joined by Bora Milutinovic- who led Nigeria to the 1998 FIFA World Cup, Alessandro Nesta- a World Cup winner in 2006 with Italy.

Also named in the FIFA Technical Study Group, are Andy Roxburgh who is regarded as the most successful coach in Scotland and Dutch legend, Marco van Basten who has been FIFA Chief Technical Development Officer since September 2016. Van Basten currently heads all technical areas at the governing body.

The FIFA Technical Study Group will be responsible for deciding the award winners for the adidas Golden, Silver and Bronze Boots for the leading goalscorers. If two or more players score the same number of goals, the number of assists, as determined by the TSG members, will be decisive. 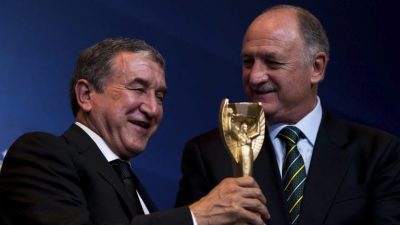 Also they will also decide who wins the Fair Play Award according to the ranking at the end of the final competition and provide a comprehensive statistics, to be distributed among FIFA’s member associations.