Ex-D’Tigers Captain Oyedeji: Super Eagles Can Shock The World Like Ghana Did In 2010 The former captain of Nigeria’s men’s basketball team Olumide Oyedeji believes the Super Eagles can cause major upsets at the Russia 2018 World Cup if they start strongly, Completesportsnigeria.com reports.

The Nigerian side are the lowest-ranked in Group D where they face Croatia, Argentina and Iceland but Oyedeji is backing his compatriots to qualify from the pool and make further progress, provided they get their act right.

“One of the key things in sport is that opponents respect you more when they realise you are strong,” Oyedeji, who captained D’Tigers to the 2015 FIBA AfroBasket title, told CSN.

“If the Super Eagles beat Croatia in their opening game, then their confidence will grow and they will be able to face the other teams without fear. With the right amount of confidence – without being arrogant or cocky – the team will go places.
“As a sportsman of many years, I also know that dedication and discipline are key ingredients for success. As a matter of fact, I’d rather have a not-so-talented team of players totally dedicated to the cause than a talented group that lacks commitment and discipline. 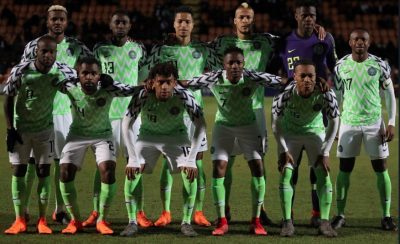 “I hope the Super Eagles in Russia will be 23 focused, dedicated, determined soldiers willing to give their country their all. I also hope they have leaders in the team who will lead with humility and set examples for the others.”
Oyedeji started as a young footballer but reached the heights of his sporting career in basketball, playing in the NBA and several other big leagues in the world.
The former Seattle Supersonics centre believes the Super Eagles squad is the right blend of youth and experience who need the right direction to excel in Russia.
“I like the make-up of the squad,” he added. “It’s a young team with some players like Mikel Obi, Odion Ighalo and Ogenyi Onazi who have valuable experience. With proper coaching and tactical planning, they look capable of achieving big things. Let the technical crew break down the opponents’ strengths and weaknesses, settle on the best approach, work out how to stop the likes of Lionel Messi, Luka Modric, Angel Di Maria for instance, and we can shock the world.
“Never say never with this team. Afterall, who knew Ghana would be on the verge of the semi-finals in 2010? I’m sure nobody tipped them to go as far as they did, and the Super Eagles can go even farther.”
Copyright © 2020 Completesports.com All rights reserved. The information contained in Completesports.com may not be published, broadcast, rewritten, or redistributed without the prior written authority of Completesports.com.