EXCELLENT, KEEP IT UP: How Super Eagles Rated Vs Iceland Completesportsnigeria.com’s ADEBOYE AMOSU appraises the performance of Super Eagles players in their 2-0 Russia 2018 win against Iceland at the Volgograd Arena on Friday…

FRANCIS UZOHO 8/10
Kept improving with every game. The young goalkeeper made a number of vital saves in the game and showed tremendous calmness beyond his age.

KENETH OMERUO 7/10
Handed his first start of the competition as part of a three-man defence and put in a fine performance all through. He played a part in the penalty the team conceded but otherwise had an excellent game.

LEON BALOGUN 7/10
The Brighton new signing came close to registering a goal in what was one of his best showings for the Super Eagles. Balogun coped well with the aerial threat of the opponents and made occasional forays upfront. 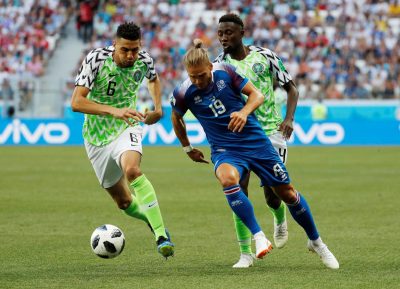 WILLIAM TROOST-EKONG 7/10
Played at the heart of the three-man defence and did well to ensure that the Super Eagles defence was not breached for the entire game.

VICTOR MOSES 7/10
Deployed in a wing-back role for the first time at international level. The Chelsea man was a constant threat to the Iceland defence for most of the game but was let down at times by his final delivery.

BRYAN IDOWU 5/10
Had a poor game like most of his teammates in the first half. He was substituted at half time for the more adventurous Tyronne Ebuehi.

MIKEL OBI 6/10
The Super Eagles captain didn’t really hit expected heights in the game but still put an above average showing and kept things tight in his deeper role.

OGHENEKARO ETEBO 7/10
He did not influence the game much like he did in the first game. He came alive in the second half and had a couple of shots on target after some driving runs.

AHMED MUSA 9/10
A man of the match performance from the forward who is now Nigeria’s all-time highest goals scorer in the World Cup with four goals after grabbing a brace in the highly entertaining encounter.

KELECHI IHEANACHO 7/0
Combined well with Ahmed Musa upfront and held the ball well especially in the second half to put pressure on the Iceland defence. 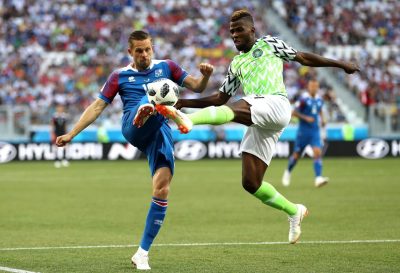 TYRONNE EBUEHI 7/10
Unfortunate to concede a penalty which was missed by Gyfil Sigurdsson but his introduction after the break for the largely ineffective Bryan Idowu added more bite to the left side of the Super Eagles defence.

ODION IGHALO 5/10
Fluffed a chance to increase Nigeria’s lead after his late introduction for Kelechi Iheanacho. Likely to start to the next game on the bench.