EXCLUSIVE- Mikel Agu: Criticisms After Zambia Game Hurt Me But I’m Determined To Win Over Boo-Boys More than a week after Nigeria secured qualification for the 2018 World Cup in Russia with a 1-0 victory over Zambia in Uyo, fall-outs of the game is still reverberating with Super Eagles midfielder Mikel Ndubuisi Agu claiming to still feel the hurt of the virulent criticism of his performance against the Chipolopolo, including copping a yellow card barely five minutes after replacing Ogenyi Onazi.

Agu, who scored his first goal of the season for his Turkish Super Lig side Bursaspor on Monday night, bared his heart in an exclusive interview with completesportsnigeria.com from his base.

Completesportsnigeri.com: Mikel, congratulations on scoring your first goal tonight (in the 3-1 win against Osmanlispor). You must be very pleased to open your goals account for the season?

Mikel Agu: Yeah, thanks bro, I’m happy to score but, more importantly, I’m happier that we won. When you work so hard, it is always nice to win games.

Being your first goal, what does this goal mean to you?

Well, it’s my first goal for Bursaspor and I want to score more. I dedicate the goal to my wife and son. I’ve been waiting to score for my son since my wife was pregnant and I’m glad I could do finally get to do it for him and his mom. Hopefully more will still come.

And what do you think the victory meant for Bursaspor, given the team’s target for the season?

Our target for the season is to keep giving our best in each game, working hard to remain competitive and helping the team to win as many games as possible so that we can finish in a good position in the league. So, in that sense, you can say the win was a huge one for us and we want to keep winning. 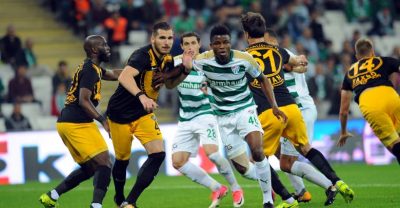 Bursaspor have been doing well this season and you’re a big part of it with Ekong. What’s the secret?

No secret bro. It has been God. Though most of them here don’t believe in God but I do and I fully believe He’s the one behind everything happening for us so far. And we also have a very good coach in Paul Le Guen. One of the best I have worked with and this is not just because I’m playing regularly. He’s very knowledgeable about the game.

Bursaspor are now eigtht on the log but do you really think you can challenge the traditional teams like Galatasaray, Besiktas and Fenerbahce for a place in Europe?

Well, without trying to sound boastful, I see no reason why we cannot challenge them. Incidentally, we have already played against each of those big teams this season and though we lost, the games were really very close and could have gone either way. Against Galatasaray, the first half was very good, we played very well and created chances even more than they did but we were just unlucky not to make use of our chances. We even scored before them but we lost 2-1. It was a good game really. Shows the gap between us and the big teams is not as wide as one would have thought. 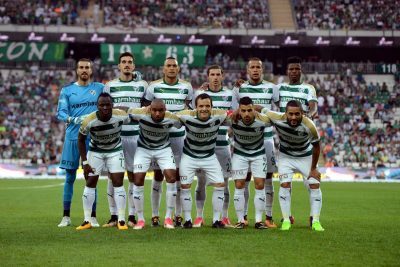 So, let’s talk about the national team. The Super Eagles will be at the World Cup in 2018. How does this make you feel that you’re part of the team that won the ticket?

See, to be honest, I think I have mixed feelings about the whole thing. Of course I’m happy we won the World Cup ticket and made the whole country happy but I’m sad when I remember the torrents of abuse that was directed at me by some people after the Zambia game. A lot of them criticized me after the game against Zambia and I think they were unfair to me. I mean we won the game for crying out loud and each player gave his all on the pitch yet I was singled out for criticism. Imagine what would have happened if we didn’t win that game?

Maybe the critics expected more from you because they knew you have the talent to do much more and the yellow card gave everybody anxiety because if you had gotten another one, playing 10 men against Zambia would have been difficult?

That’s possible but you should also understand the circumstances under which I went into the game. Nobody foresaw that there was going to be a change that early and because the tension was high in the game, it took me time before I could properly get into the match. I did everything the coach asked of me though the yellow card was not part of it but I think I settled down and helped the team more as the game progressed.

Now, as they say, criticism is a part of the job and it depends on how you react to it. So, will the critics affect you negatively or will they motivate you to do better now or what?

Yes, the criticism hurts me but it has made me to keep working harder. I just need to believe first in myself and try to prove all of them wrong. Even the big players do have their bad days in football. Trust me, I will win them over.