Eze Makes Team Of The Week In Bulgaria By Johnny Edward: Nigerian defender, Stephen Eze is pleased to have made the team of the week in the Bulgarian top division for the first time in his first start for Lokomotiv Plovdiv, ‎Completesportsnigeria.com reports.

Eze has made two appearances since he joined the club on a two year deal – against Slavia Sofia which ended in a 1-1 draw and a 1-0 win over OFK Pirin.

The 22 year old is the second Nigerian at the cclub, the other being Super Eagles right-back, Musa Mohammed.

“Honored to be included in the ‘Team of the Week’ for the First Professional Football League (Bulgaria),” the home-based Super Eagles defender to the 2018 African Nations Championship tweeted through his Twitter handle, @DefendLikeEze.

“Love and support I have received since my arrival has been overwhelming. I hope to make you all proud.”

Lokomotiv Plovdiv host Botev Plovdiv in a local derby on Sunday. And Eze is looking forward playing his first derby the club. 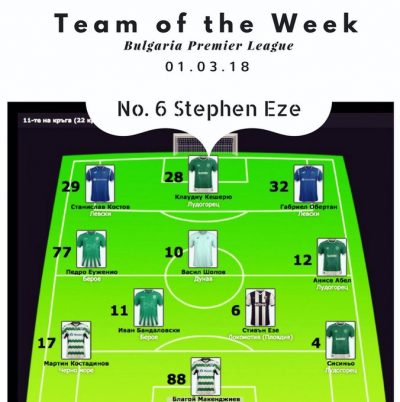