Ezenwa Happy To Get Messi’s Jersey After Super Eagles Defeat Super Eagles reserve goalkeeper Ikechukwu Ezenwa will be heading back home from the 2018 FIFA World Cup in Russia a happy man after gaining one valuable souvenir – Lionel Messi’s match shirt.

Ezenwa, 29, who plays for Nigeria Professional Football League club Enyimba, was in goal in four of Super Eagles’ four qualifying fixtures but lost his place to youngster Francis Uzoho.

At the full-time whistle there was a complete contrast of emotions. As the Argentina stars celebrated wildly on the pitch the Super Eagles players laid still on the floor in anguish. 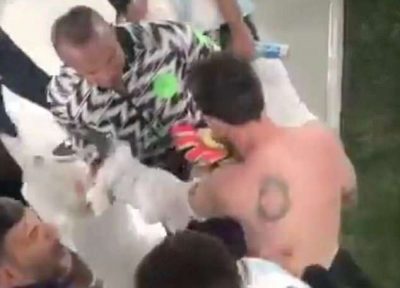 Once the celebrations and commiserations were over, Ezenwa according to a report in the Daily Mail made his move, cornering Messi in the tunnel to ask for his shirt.

Ezenwa who has been capped 24 times by Nigeria appeared to have been the only player to ask Messi for his jersey.

Having not played, Ezenwa had nothing to offer in return but Messi was more than happy to oblige and handed his shirt over.