By Kayode Ogundare:
The battle has been one and lost but the war is far from over. We lost 2-0 to Croatia but we still have games against Iceland and Argentina to rescue our World Cup hopes. However, what are the six things we learnt from the first game.
1. ROHR’S FORMATIONS AND SUPER EAGLES STRENGTH:
Former Super Eagles Technical Adviser, Jo Bonfrere said, just last week, of the Nigerian team’s infidelity to a particular system of play: “You cannot play today 4-4-2, tomorrow 4-3-3 and next week 5-4-1. That is not possible, a team cannot do this. You cannot change the system (of formation). If you can change the system (of formation), then you have one of the best football team. Nigeria has a system at this moment which they (the players) don’t understand to play. But Croatia is playing the system even when they played against Brazil. Though they lost to Brazil, they still played a system. Nigeria is changing and changing the system. Up till now, the player does not know what or where he must play and that can be a big problem against Croatia.”
I agreed with him then and, after the game, I still agree with him. The Super Eagles played without pace in a system they were not too familiar with. This is like shooting yourself in the foot. After two years in charge, Rohr should have settled for a system that the players would be familiar with by now. How long do we keep chopping and changing?
2. EAGLES SET-PIECE DILEMMA:
I was fortunate to cover the Super Eagles pre-World Cup training camp in Uyo and twice, once in Lagos and the other at the Ibom Resort Hotel in Uyo, when I had the opportunity to discuss with coach Gernot Rohr, I brought up the issue of our seeming impotence with set-pieces. We don’t take advantage of it like other teams do – we scored only once from a corner (Mikel’s goal against Cameroon in Uyo); once from a free-kick (Iheanacho’s goal against Argentina in Krasnodar) and once from a penalty (Moses’ goal against Poland in Wroclaw) in the two years Rohr has been in charge. We didn’t fare any better before him either. He promised to work on the team’s ability to defend set-pieces and how they profit when they get their own opportunities from corners and free-kicks.
Apparently, he’s not finished teaching them or the Eagles have yet to imbibe the lessons taught. Against Croatia, we gifted away two goals from corner-kicks. The first goal wouldn’t have come if we cleared our lines promptly. And the second wouldn’t be if Troost-Ekong had not watched too much Wrestlemania. 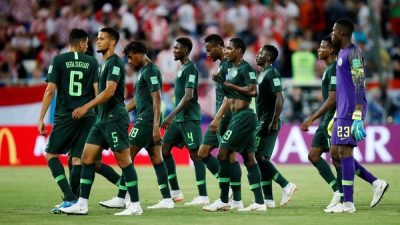 3. IWOBI’S SUBSTITUTION STRANGE:
Now, I don’t claim to be a certified coach but I know a player who’s doing well when I see one. It was my considered opinion that Alex Iwobi was not doing too badly, in a generally average team performance of course, so I was surprised to see the coach haul him off when he did. Iwobi was the most vibrant of the three-man support cast in the Eagles 4-2-3-1 formation and I would have allowed him stay on the pitch, remove Shehu Abdullahi and push Victor Moses to the right full back to create space for Kelechi Iheanacho in attack. But what do I know?
4. SHEHU ABDULLAHI’S FORM IS WORRYING:
During the qualification for the World Cup, right full back Shehu Abdullahi was one of our most outstanding players. He made the right full back his own after Gernot Rohr had tested Wilfred Ndidi (against Zambia in Ndola) and Kenneth Omeruo (for one hour against Algeria in Uyo) in that position. He came on for Omeruo after 65 minutes and played every single minutes of the remaining games, including a Man of the Match performance against Zambia in Uyo. Strangely, this was while he still played for Anorthosis Famagusta in the lightly-regarded Cypriot league. Since he moved to the better-rated Turkish Super Lig for Bursaspor, his form has dropped seriously and this is not for a lack of playing time because he’s one of the club’s regulars since joining them last January.
He was roundly condemned for his performance against the Czech Republic and against Croatia he was the team’s weakest link. Hopefully, we might get to see the youngster Tyronne Ebuehi in his place against Iceland. Hopefully. 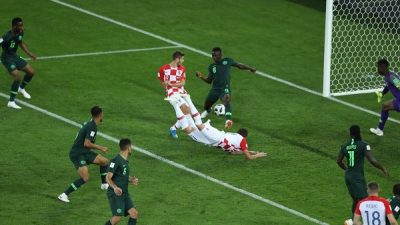 5. UZOHO’S BLAMELESS SO FAR:
One of the biggest talking points in the run-up to the World Cup was the relative inexperience and low profile of goalkeeper Francis Uzoho who gatecrashed the World Cup party after the ticket had been won. Much was made of his age and the fact that he plays in the Spanish lower divisions. Many people prophesied that he was going to leak like a basket.
Well, it hasn’t exactly happened like we feared. Against Croatia, Uzoho was one of our better players and you couldn’t blame him for any of the two goals. He had good control of his area, communicated well with his defenders and, I noticed, his kick outs were a massive improvement from what it used to be when he first started out with the Super Eagles. He also did not display any nerves as he kept it simple and basic. Let’s hope he gets better in the games ahead. Let’s hope we have not spoken too soon, either.
6. IGHALO CANNOT BE LONE STRIKER:
Odion Ighalo was the arrowhead of a 4-2-3-1 system and, for the umpteenth time, we saw him struggle upfront on and off the ball. He cut a sorry figure as he tried to chase the balls down all on his own.
If there’s one thing that’s clear to me about the current Super Eagles, it is the fact that Ighalo cannot thrive as a lone striker. He’s just not cut for that role. His best spell in club football was at Watford where he scored 36 goals in 72 games, an impressive average of one goal every two games or 0.5 per game. Guess what? He had a certain Troy Deeney playing as a foil for him and that was why he was so productive.
So it is wrong to crucify Ighalo for his performance while ignoring the fact that we refused to play to his strength. I suggest we find a way to accommodate him and, say, Iheanacho where the Leicester City striker will play in the hole behind Ighalo. Sounds promising. doesn’t it?
Copyright © 2020 Completesports.com All rights reserved. The information contained in Completesports.com may not be published, broadcast, rewritten, or redistributed without the prior written authority of Completesports.com. How I make $10,000 monthly in Online SALES? apply the *Social Media Marketing Strategy* and watch your account balance swell. Buy eBook NOW!!!