D’Tigress coach Otis Hughley Jr has praised his side’s efforts in their 71-40 loss to the USA in the quarter-finals of the 2018 FIBA Women’s World Cup in Tenerife Spain on Friday.

Nigeria started brilliantly in the game holding the USA to nine points in the first quarter, the first time it ever happened to the USA in World Cup or Olympics history. 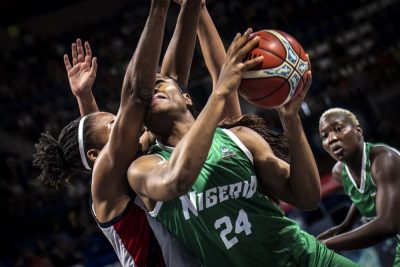 It was also the first time the USA scored less than ten points in any quarter since 2006 and their last defeat, against Russia in the semi-final.

“I love these girls. I have two biological daughters and I feel like I have 12 more daughters,” Hughley said during his post-match interview.

“I thought they fought really well in the first half. I think the difference in the game is who shot well. I thought we played exponentially above what we have.

“Our girls dug down until there was nothing left. I’ve never felt so happy after a 31-point loss.”

The defending champions, USA overcame a slow start to book a spot in the semi-final with a 31 point win.

It was their 20th straight win in FIBA Women’s World Cup and are now at 9,999 points in the history of World Cups.

USA’s Breanna Stewart finished with 19 points, A’Ja Wilson had 11 points in 13 minutes, and Tina Charles got eight points and 15 rebounds.