By Johnny Edward:
Nigeria’s D’Tigress exited the 2018 FIBA Women’s World Cup in Tenerife Spain after losing 71-40 to the USA in the quarter-finals of the competition on Friday, reports Completesportsnigeria.com.

It was the second time the reigning African Champions lost to the United States at the FIBA Women’s World Cup. The first was a 79-46 loss at the 2006 edition hosted by Brazil. 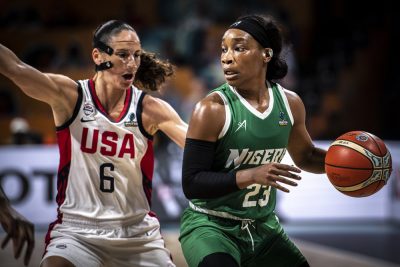 Despite the defeat, Otis Hughley’s girls set a new African record as the only team to have won three games at the 2018 FIBA Women’s World Cup and also attaining a quarter-final feat.