FIFA TV Crew: We’re Set To Give The World Classy Live Feeds Of Croatia Vs Nigeria Exclusive by Nnamdi Ezekute in Kaliningrad:

The technical staff of the home broadcaster for the 2018 FIFA World Cup, HBS France Production, has assured Nigerians and worldwide World Cup television audience that the team is ready to provide a top class TV coverage of the Croatia vs Nigeria Group D match and the other games here in Kaliningrad, Completesportsnigeria.com reports.

Complete Sports visited the Kaliningrad Stadium on Wednesday evening to observe the the general build-up to Croatia-Nigeria clash which is the very first ever World Cup match in the city of Kaliningrad. And everyone involved in the build-up who spoke to Complete Sports assured that everything from Kaliningrad will be of great standard. 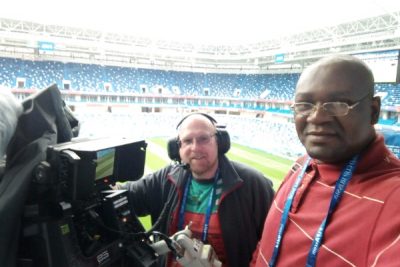 The HBS France Production crew were particularly upbeat about giving the world audience great live pictures of the match. Some of the crew members spoke exclusively to Complete Sports as they sweated through setting up of their equipment and general testing of their operations on Wednesday.

Neil Clifford who will man the wide camera located in front of the Media Tribune told Complete Sports that HBS was 90 per cent ready with perfecting its installations at the Kaliningrad Stadium as at 5pm local time on Wednesday.

“We are 90% through with installations and testing of all our equipment for this first match in Kaliningrad,” Clifford told Complete Sports. 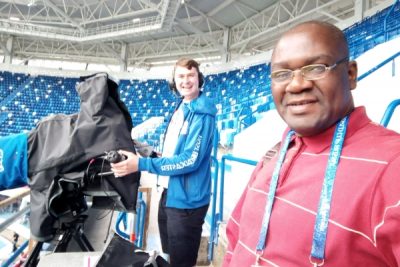 “Your people (Nigerians) back home, and everyone else around the world who will watch the match on television will enjoy the experience. We’re installing 25 cameras in this stadium, which will pick up all the details for the enjoyment of the TV audience.

“Yes, watching the match in the stadium offers its perculiar fine experience, but our 25 cameras have a lot to offer the television viewers.

“Good luck to your team, good luck to Nigerians. We’ll give them a special experience from watching on TV. I hope your team gives them great experience too with great performance.” 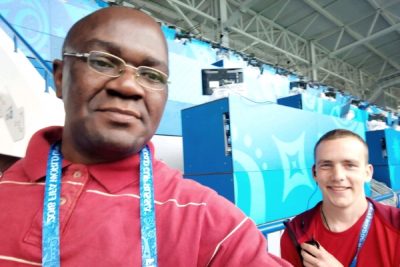 Jack Daniel, another cameraman working for the host broadcaster, added: “We are here to give the worldwide television audience a great World Cup experience which is very important to FIFA. Everything from Kaliningrad about tv will be fine and great.”

A certain Vitali, a young internet network engineer, told Complete Sports that he was setting up the internet facility at the Media Tribune with his team. And he assured that his team will not give anything second-class to the world media at the Kaliningrad venue.

“I am a network engineer, working with my team to ensure that media representatives do their work without internet service hitches during every match in Kaliningrad,” he said with a smile. “They always say that the World Cup is a media stuff. So, who wants to fail them, who wants to fail FIFA?”

A groundsman who identified himself as Leonardi told Complete Sports through a volunteer translator that the work of his team had been strenuous on Wednesday.

Some young Russian volunteer workers were also seen inside the Kaliningrad Stadium on Wednesday giving logistic support to the technicians. 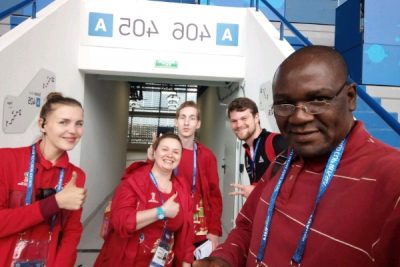 Ekaterina Gregoriva, the leader of that section of the volunteers section said the team was happy to have Complete Sports around in the stadium as the preparation for the kick-off of action in Kaliningrad with Croatia-Nigeria clash reached an advanced stage.

“As you can see, we are very happy doing this work. This World Cup is very important to the city and people of Kaliningrad. We can’t wait for the showpiece to start here. Thank you for coming. Good luck to Nigeria in this World Cup.”