Nigeria’s U-20 women team, the Falconets lost 1-0 to the three time World Champions, Germany in their opening Group C game at the 2018 FIFA Women’s World Cup in France, reports Completesportsnigeria.com.

Stefanie Sanders fired in from close range in the 70th minute after the Falconets failed to clear their lines from a corner kick at the Stade de Marville, Saint Malo on Monday.

It’s the third defeat suffered by the Nigerian U-20 side in the hands of the German Womens U-20 team. They had lost in the finals of the 2010 and 2014 final.

The opening minutes of the game was scrappy as both teams failed to string good passes from the middle.

Germany came close twice before the break but were denied by Chiamaka Nnadozie who was outstanding in the encounter.

In the second half, Rasheedat Ajibade and Anam Imo also had chances but were denied by Vanessa Fischer. 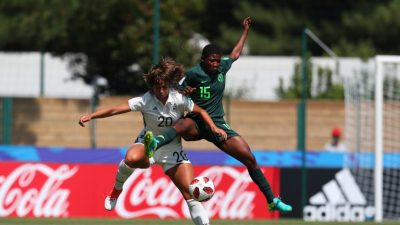 Nnadozie made seven good saves to keep the German side at bay during the encounter but she could not stop Sanders from breaking the deadlock with 20 minutes left to play.

The unlucky Super Falconets had a chance to restore parity shortly after going down by a goal but Anam Imo was denied by the upright. She also came close to drawing level with a header in the final seconds of the game but her attempt was saved by Fischer.

The Falconets will look to redeem themselves when they face Haiti at the same venue on Thursday, 9th August.

Their final Group C game is against China at the Léhon’s Stade de Clos Gastel stadium on Monday, 13th August.