Four Nigerian clubs Enyimba, Plateau United, MFM and Akwa United will seek places in the group stages of the CAF Confederation Cup this weekend. Completesportsnigeria.com’s ADEBOYE AMOSU here presents a detailed analysis of their chances ahead of the games…

Enyimba have the best record on the continent among the four Nigerian clubs that are seeking to win the CAF Confederation Cup for the time first time this year.
The Peoples Elephant have won the CAF Champions League twice in the past and are seasoned campaigners on the continent.
The Aba giants have kept most of their key players from last season and recruited well too. Super Eagles goalkeeper, Ikechukwu Ezenwa, has joined the club on a one-year deal after severing ties with FC IfeanyiUbah.
Ezenwa’s signing has added depth to the position with former Black Stars of Ghana goalie Fatau Dauda and former NigeriaU-23s star Theophilus Afelokhai still around.
Ghanaian duo Farouk Mohammed and Tofic Umar’s arrivals have also boosted the midfield, while the likes of Wasiu Alalade, Ernest Governor, Augustine Oladapo and Chinedu Udeagha have all proved to be quality additions.

VERDICT: Enyimba have enough quality to see this through though Bidvest Wits who were eliminated from the CAF Champions League by Angola’s Primeiro do Agosto will be a tougher opponent compared to Energie FC of Benin Republic who Enyimba defeated home and away in the first round. It will be one of the shocks of the competition if Enyimba fail to scale through against opponents who have less quality and are also making their debut appearance on the continent.

Enyimba to go through.

For the second consecutive game, fans of Nigeria Professional Football League champions Plateau United will not have the privilege of seeing their darling team play a continental game at the New Jos Stadium. The stadium which is still going under construction is not deemed suitable to host matches at the moment by the Confederation of African Football.
With the memory of their 4-3 aggregate defeat to Etoile du Sahel of Tunisia still fresh in their minds, the Jos club will be determined to move into the group stages at the expense of USM Alger.
Though this looks like a tall order on paper, Kennedy Boboye’s side do have enough quality to beat the Algerians.
The likes of Tosin Omoyele, King Osanga, Rapheal Ayagwa and Peter Eneji are fearsome forwards capable of troubling any defence on their day, while defensive stalwarts, Elisha Golbe, Terna Suswan and Beninoise international Salomon Junior will provide cover in defence.

VERDICT: USM Alger were unconvincing in the first round against AS Maniema of Congo who they edged out 3-3 on the away goals rule, while Plateau United showed their class against Cameroonian champions Eding Sports who they defeated home and away in the first round and were unlucky not to make it to the group stages of the CAF Champions League with their poor start in Sousse against Etoile du Sahel proving catastrophic in the end.
A comfortable win at the Agege Stadium will put Plateau United in a good position to scale through this hurdle. They are surely good enough to qualify ahead of the Algerians.

Plateau United to scrape past the experienced Algerians.

This is the second time MFM will be coming up against Malian opposition in a continental game this season. Their first experience ended on a successful note as they edged out AS Real de Bamako 2-1 on aggregate in the preliminary round of the CAF Champions League.
Djoliba, seasoned campaigners on the continent will however offer a different challenge and the Lagos side will need to be at their best to advance to the group stages.
Key trio Jese Akila, Sikiru Olatunbosun and Waheed Adebayo are all ineligible to feature in the tie and goal scoring responsibilities will fall on Chijoke Akuneto once again.

VERDICT: The Olukoya Boys were roundly trounced 6-0 by MC Alger in their last game on the continent and Djoliba may also prove too strong for them. On the basis of form they have shown so far this season, it seem difficult to see MFM making it to the group stages.

MFM not favourites to go through. 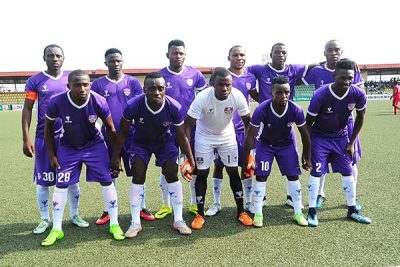 Akwa United have ridden their luck at times in the competition this season and this is no doubt their biggest test yet. To scale through this hurdle, they will need their key players to raise their game, something they have struggled to do in the competition this year.
The Promise Keepers turned the tables against Banjul Hawks of Gambia in the preliminary round after going down to a shocking 2-1 home defeat in the first leg. The Nigerians won 2-0 in the reverse fixture and needed penalties to move past Al Ittihad of Libya in the first round.

VERDICT: Akwa United can be unpredictable but a return of two goals in two home games in the competition is not good enough. They will need a handsome home win to have any chance of progressing as the Sudanese will make the return leg tough.