Gabriel: Okpotu And Myself Will Make Life Difficult For Moroccan Defence In CHAN 2018 Final By Johnny Edward: Akwa United striker, Okechukwu Gabriel, says playing alongside Anthony Okpotu in the Home Eagles attack will be too much for the Moroccan defence to handle in the final of the 2018 African Nations Championship later tonight in Casablanca, Morocco, Completesportsnigeria.com reports.
Gabriel told Completesportnigeria.com prior to  the team’s lunch on Sunday that he has struck a good understanding with the Lobi Stars hitman who has been unfairly criticised.
“Okpotu is a very good striker and I’m happy playing alongside him in the attack,” Gabriel told Completesportsnigeria.com.
“His work rate for the team has been tremendous and he has scored twice as well. 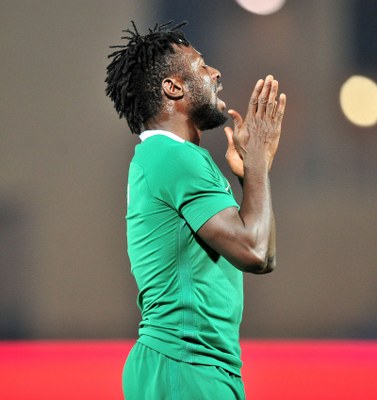 Anthony Okpotu of Nigeria reacts in disappointment after missed chance during the 2018 CHAN semifinals football game between Sudan and Nigeria at the Grand stade Marrakech in Marrakech, Morocco on 31 January 2017 ©Samuel Shivambu/BackpagePix

“We both have the qualities to wreck their (Moroccan) defence and we’ve been talking about it as well. We just want to make Nigerians proud by winning the match.”
Both Okpotu and Gabriel are expected to lead the Nigeri’s attack in tonight’s final against Morocco barring any last minute tactical change.
How To Migrate To Canada Without IELTS - A must read for anyone looking for a better life abroad".... Copyright © 2020 Completesports.com All rights reserved. The information contained in Completesports.com may not be published, broadcast, rewritten, or redistributed without the prior written authority of Completesports.com.
Share