He scored 14 goals and made 17 goals in al competitions for the Citizens.

He will, however, play no part for his country in Russia this summer after being cut from coach  Joachim Low’s 27-man preliminary party.

Sane has failed to translate his club form to the national team, scoring no goal and getting only one assist in 12 appearances.

The three other players dropped are; Bernd Leno, Nils Petersen and Jonathan.

Sane Manchester City teammate, Ilkay Gundogan was however included in the team as well as regulars like Mesut Ozil, Toni Kroos, Sami Khedira and Jerome Boateng

Bayern Munich goalkeeper Manuel Neuer gets the nod despite his recent injury struggles, while Borussia Dortmund forward Marco Reus will get the chance to put his previous fitness issues behind him – with the 29-year-old having missed out on a successful World Cup campaign in 2014. 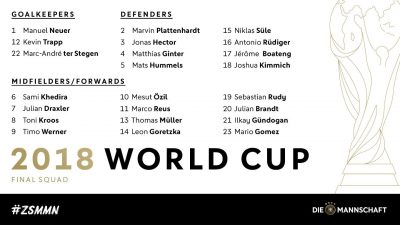 Germany are set to open their 2018 campaign against Mexico on June 17, before going on to face Sweden and South Korea in their other Group F fixtures.