Chelsea striker, Olivier Giroud, has praised Nigeria international Victor Moses for his impressive showing in The Blue’s Sunday’s 1-0 win against Liverpool in the Premier League.

Giroud nodded home Chelsea’s solitary winner from the Super Eagles winger’s cross in the 32nd minute of the game which kept the Blues’ hopes of making the top four alive.

Speaking after the game, the former Arsenal star eulogised Moses for making it possible for him to score the crucial goal in the encounter.

“I know Vic and when he doesn’t cross the ball as his first intention, he goes on his left foot and still tries to cross it and tries to pass the first defender, and he has done it very well,” Giroud told Chelsea website

“There was a small deflection and I had to be in front at the first post, and it was a great cross and I have just finished it”.

It was Giroud’s third goal in 11 Premier League games for Chelsea since he joined the Stamford Bridge side from Arsenal this season. 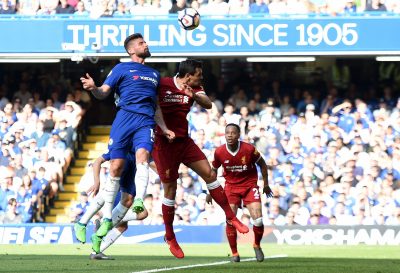 Chelsea are currently fifth in the Premier League table with 69 points from 36 games , three points behind Liverpool.

The Antonio Conte’s team will host Huddersfield Town at Stamford Bridge on Wednesday.