The 2018 Commonwealth Games in Gold Coast, Australia, will begin on Wednesday, April 4.

Ngeria will be one of 71 Commonwealth countries that will compete at this year’s edition.

Nigeria’s first participation at the Commonwealth Games was at the sixth edition held in Auckland, New Zealand in 1950.

The country also won its first ever medal in any international sports, a silver medal in the Men’s High Jump event through the late Josiah Majekodunmi in Auckland.

Majekodunmi finished joint-second with Scotland’s Alan Paterson with a leap of 1.95 metres.

The gold medal went to John Winter of Australia with a jump of 1.98 metres.

The 1954 edition in Vancouver saw Nigeria win its first ever gold medal at the Commonwealth Games thanks to the late Emmanuel Ifeajuna in high jump.

Ifeajuna, a Nigerian army major who played a principal role in the January 15, 1966 military coup, had a personal best jump of 6 ft 8 in (2.03 m) which was a games record and a British Empire record at the time.

His feat in 1954 made him the first Black African to win a gold medal at an international sports event.

Victoria 1994 Commonwealth Games in Canada is still Team Nigeria’s most successful outing at the games since they made their debut in 1950.

At the end of hostilities, Team Nigeria garnered 11 gold, 13 silver and 13 bronze medals to finish with a total of 37 medals.

Their impressive performance saw them finish fourth out of the 33 countries that competed.

The closest Team Nigeria have come to equal the feat in 1994 was at the last edition in Glasgow 2014 when they won 11 gold, 11 silver and 14 bronze medals.

Prior to the final of the women’s 100 metres at the Glasgow 2014 Commonwealth Games, Debbie Ferguson-McKenzie of Bahamas was the record holder.

Ferguson-McKenzie ran a time of 10.91 seconds to set the record at the 2002 Manchester Games.

Okagbare eventually broke the record with a time of 10.85 to win the gold medal in Glasgow. 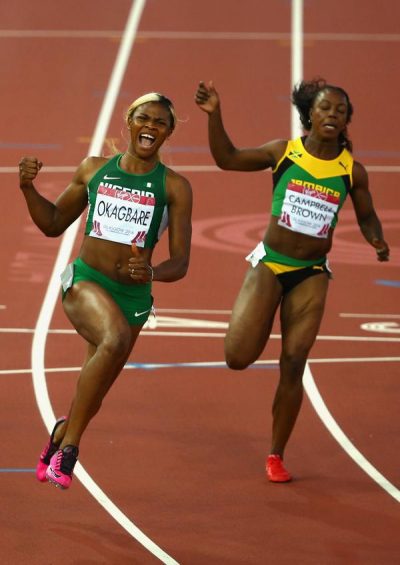 At the 1982 Commonwealth Games in Brisbane, Australia, Oliver Orok became the first Nigerian to win a gold medal in weightlifting.

Orok lifted 350.0 kg in the sub heavyweight category to grab Nigeria’s first gold medal in weightlifting at the games.

Modupe Oshikoya created history at the 1974 Games in Christchurch, New Zealand as she became the first Nigerian woman to win a gold medal at the Commonwealth Games.

Competing in the long jump event, Oshikoya won gold with a jump of 6.46 metres to write her name in the record books.

She beat Brenda Eisler and Ruth Martin-Jones both from Canada and Wales respectively.

Competing in other events at the same Commonwealth Games, Oshikoya went on to win silver in the Pentathlon and bronze in the 100 metres hurdles.

The 1966 Commonwealth Games in Kingston, Jamaica, would be remembered as one which Nigerian legendary track and field athlete Violet Odogwu-Nwajei created history.

Odogwu-Nwajei became the first African woman to win a medal at the Commonwealth Games after claiming a bronze medal in long jump.

A jump of 6.15 metres was enough to see Odogwu-Nwajei clinch a podium finish behind Mary Rand (6.36 metres) of England and Sheila Parkin (6.30 metres) also from England.

Nigeria took part in the boxing event at the Vancouver 1954 Commonwealth Games.

For the first-time ever, Nigeria won a medal in boxing at the games thanks to Abubakar Idi Garuba who picked up a bronze medal.

Garuba achieved the feat while competing in the bamtamweight category for men.

Adekunle Adesoji picked up the gold medal in the 100 metres EAD in the para-sports event at the 2002 Commonwealth Games in Manchester, thereby setting a games record of 10.76. 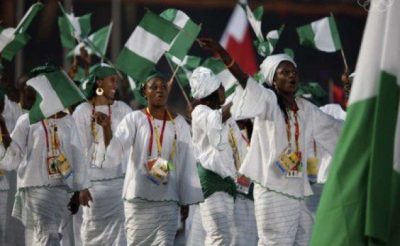