By Adeboye Amosu:
Nigeria booked a place in the 2019 U-17 Africa Cup of Nations after beating perennial rivals, Ghana 3-1 on penalties in the final of the WAFU qualifying tournament at the Seyni Koutnche Stadium Niamey on Saturday, reports Completesportsnigeria.com.

The game ended in a 1-1 draw after regulation time.

Ghana dominated the game in the first half, but were unable to beat Golden Eaglets’ goalkeeper, John Amah who made a number of vital saves.

The Black Starlets took a well deserved lead in the 54th minute. 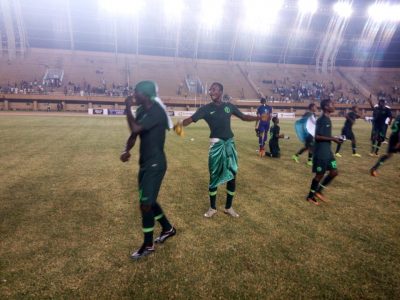 Both sides carved out numerous chances afterwards but were unable to find the winning goal.

In the penalty shootout, the Eaglets triumphed 3-1 and will thus join seven other teams to battle for four World Cup slots at the 2019 U-17 AFCON tournament in Tanzania.

The Golden Eaglets netted three kicks but lost one, while the Black Starlets converted only one of their four kicks.

David Ishaya, Samson Tijani and Muhammad Ibrahim scored for Eaglets in the shootout, while Amoo who scored in open play lost his penalty kick.