Proud Manchester City manager, Pep Giardiola, has has explained the force behind the Premier League champions’ ruthless 6-1 mauling of Huddersfield Town at the Etihad Stadium on Sunday.

Sergio Aguero bagged a hat trick for Pep Guardiola’s side as they cut open the Terriers at will, showing why they are once again favourites to clinch the Premier League title this season.

Gabriel Jesus also got on the scoresheet for the hosts alongside David Silva, before a Terence Kongolo own goal capped the scoring for City.

Jon Gorenc Stankovic had pulled one back for Town before the interval on his Premier League debut, but City were by far the better team on the day.

Happy man, Guardiola, reflects on the gameduring his post match interview with the media, saying that his team’s attacking formation paid off handsomely. 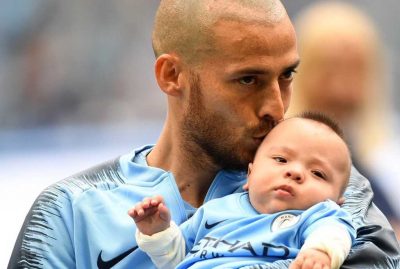 “Today we attacked with 10 players in the box and played well,” Guardiola said.

“We decided to play with two strikers to put pressure higher up the pitch.”

And he heaps plaudits on hat-trick hero, Sergio Aguero.

“He is one of the best, best, best strikers in the world without a doubt,” Giardiola hailed.

“More clinical? Three goals a game is okay. I won’t ask him to be more clinical! He came back perfect.”

The Manchester City boss will also applaud the contribution of Gabriel Jesus’ in the game.

“He had a good World Cup but here we judge them if they win or if they score. We have to give him a lot of credit for the space he creates,” he remarked.

Guardiola is pleased that David Silva gave his family, especially his baby son Mateo who was at the Etihad Stadium, something special to cheer about by scoring in the game.

He said: “His son will never forget the first time he saw his dad play football and he scored a goal for him.

“It has been tough for his family, but fortunately he had a little boy and he is here. It’s a special day for them, for us and for David.”