Manchester City manager, Pep Guardiola, has praised his players for earning what he describes as a very good point in their 1-1 draw with Wolverhampton Wanderers at the Molineux Stadium, Wolverhampton on Saturday.

The Premier League champions relinquished their perfect start to the 2018-19 campaign as they had to come from a goal down to claim a share of the spoils against their hosts.

“It was a very good point,” Guardiola told reporters after the game.

“We created chances but their keeper made saves, so today we draw. We knew how good they were this season.

“No complaints. We were in the second half four, five, six times in attack, but it’s always complicated. We created a lot, that’s why it’s good. 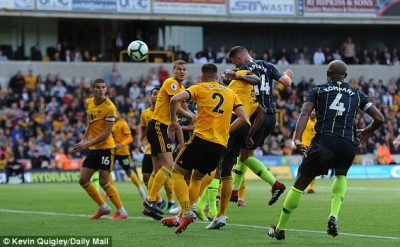 “In the first half, Aguero hit the post, sometimes it goes in, sometimes not. It’s just we were not solid defensively today. That is why we conceded a few chances to them but in general the game, considering the quality of the opponent, was good. We have to give credit.

“Since I arrived three seasons ago we knew how complicated it is and everything, the team was ready especially when we conceded our first goal, the reaction was good. They are fast, strong, good midfield players, I am really surprised how good we played in our build-up but in the end we could not convert.”

The draw keeps the Citizens top of the Premier League table for now, with the rest of the weekend’s games still to come.