Russia has had its fair share of problems to deal with when it comes to organizing the Fifa 2018 World Cup successfully. First, there were the problems of slow construction work in its stadiums. Some of the construction work has just got finished, with just weeks to go for the major event of the year.

Then, there was the problem of finding and arranging the right transportation for the tourists. Trains were introduced as a result by Russian Railways. And now with just weeks to go before the event kicks in, Russia has disclosed the number of foreign tourists it expects to visit the country for the event.

Just like any other World Cup, this year too will see a major boost to the tourism economy of the hosting country. And while you can always bet on your favorite football matches with, we are sure you would want to head off to Russia if you can.

Half a Million Foreign Tourists: What Russia Expects for the 2018 FIFA WORLD CUP

The football fever for the fans is at its peak this year as the 21st FIFA World Cup is going to commence this year on 14th of June in Russia. 11 host cities in Russia will now face a massive influx of ardent football fans from all over the world within the coming months which would make this country their second home to view the match right in front of them in one of the 12 venues set for this grand sports event.

The FIFA World cup will be held from 14th June to 15th July 2018 with more than 32 teams from 5 confederations participating in this tournament, testing their luck in becoming the next football champion of the world.

Russia’s bid to be the host

The process of host selection was a tough one which began as early as 2009 with 8 countries fighting for the position. Russia finally won the rights to host this tournament and has since been preparing to accommodate teams and football fans from all over the world.

Arrangements made for massive tourist influx

With over five hundred thousand people expected to visit Russia in the months of June and July, the country has immersed itself in expanding its resources to the maximum capacity. The security is being strengthened at every nook and corner, and the host cities are beaming with excitement to welcome thousands of people to enjoy their hospitality.

The tourist portals of the country are now flooded and completely laboured with requests and booking from all the countries around the globe. The average cost of hosting this magnificent football tournament is estimated to be 10 billion dollars. 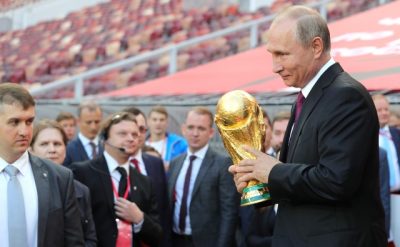 President Vladimir Putin has made the process of visiting Russia simply by waiving off the visa requirements. The process of travelling and exploring the country has also been made convenient for the tourists as various restrictions laid down by the Russian Government have been put on hold. With less than 50 days left for the tournament to start, the football fans all over the world are now eagerly waiting to visit this beautiful country.