Why Harry Kane Can Be Better Than Batistuta – Pochettino Harry Kane has all the attributes to surpass legendary Argentine superstar Gabriel Batistuta according to Spurs’ boss Mauricio Pochettino after the England striker scored twice to lead Tottenham to a comprehensive 3-0 victory over Everton in the Premier League on Saturday.

The 24-year-old England international striker did not score in August but he was at the double on Merseyside as he celebrated his 100th goal for Tottenham. 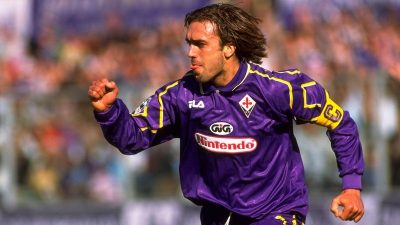 Gabriel Batistuta in action for Fiorentina

“For me, OK, I put Batistuta there, ” he said, raising one hand above the other, “and Harry there,” with his other hand a little lower.

“But Harry can be better. He is a killer, Harry Kane. Look at the goals he scored the last years! Mental level? Yes. Absolutely [they are the same].

“Maybe they have different characteristics but I think he is in that level, with Batistuta.”

Pochettino added: “I would put Harry Kane in with Batistuta. All that is happening to him he deserves. He is the protagonist of his life, and he deserves all the prize.”