France And Arsenal legend, Thierry Henry, has announced that he will quit his role as a football pundit at SkySports, Comlpetesportsnigeria.com reports.

Henry joined Sky Sports as a football expert and ambassador after he retired from active football in 2015.

He was appointed as a third assistant coach to Roberto Martínez when the Spaniard was name Belgium’s new manager in 2016.

Henry’s role as an assistant manager with Belgium saw him help the Red Devils to third place in the 2018 FIFA World Cup in Russia.

“Over the last 4 years I have had some extremely rewarding coaching experiences in football. These experiences have only made me more determined to fulfil my long term ambition to become a football manager,” Henry tweeted on Monday.

“It is with sadness, therefore, that I have decided that I must leave @SkySports to enable me to spend more time on the pitch and concentrate on my journey to achieving that goal.

“I would like to thank everyone at Sky for making me feel so welcome and at ease throughout my time with them and I wish them all the best for the future. Great memories.” 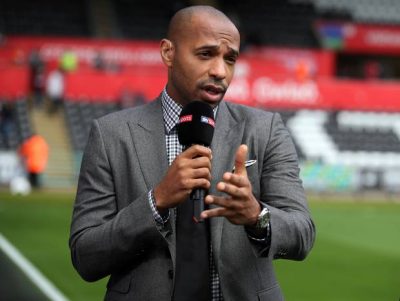 Henry lifted more than 35 major individual and team trophies including the World Cup and European Championship for France, the Champions League and La Liga with Barcelona, the Premier League and FA Cup at Arsenal, the French League at Monaco and the MLS Shield with the New York Red Bulls.

He is the all-time leading goalscorer in the history of both Arsenal and France. He was also an integral member of the historic Arsenal Premier League-winning ‘Invincible’ team of 2004.